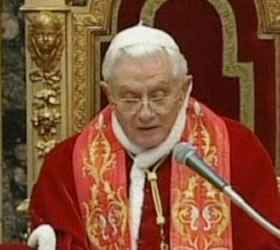 Pope Benedict called on Monday for a re-examination of the Church’s message and practices to enable it to learn from the scandal of the sexual abuse of children by Roman Catholic priests.Presenting his annual Christmas wishes to cardinals, he said the reports of abuse by priests on an “unimaginable” scale had been a devastating shock to the Church and had to be used as a starting point for reform.”We must accept this humiliation as an exhortation to truth and a call for renewal. Only the truth saves,” he said, according to an Italian text released by the Vatican.”We must ask ourselves what was mistaken in our message, in our entire method of configuring the Christian being, that such a thing could happen.”We must force ourselves to try everything possible in the preparation for the priesthood, that such a thing cannot happen again.”

Earlier this year, the Pope begged forgiveness for the scandal which has shaken the Catholic Church and set off protests around the world but there have been continued calls from groups representing abuse victims for more to be done.In his speech to cardinals, the Pope said the Church had to accept its responsibility for the sins committed by priests.”But we cannot be silent on the context of the times which witnessed these events,” he said.”There is exists a market for pornography concerning children which in a certain sense seems to be considered more and more by society as a normal thing.”The psychological devastation of children, in which human persons are reduced to market wares, is a devastating sign of the times.”He said there were increasing reports from bishops in Third World countries of sexual tourism which threatened to damage an entire generation – France24