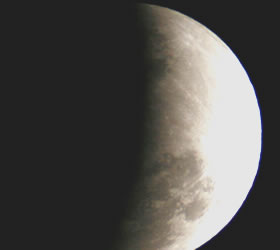 On Tuesday, the longest night of the year in the Northern Hemisphere, the night sky will be even darker than usual, as a total lunar eclipse and the winter solstice coincide for the first time in 372 years.During a total lunar eclipse, the full moon passes through Earth’s shadow, which blocks light from the sun that we normally see reflected from the moon’s surface. The moon turns quite dark – often a copper or dark red color – until it passes out of Earth’s shadow.North America and Central America will have the best view of the lunar eclipse, which will begin at 0633 UTC. As Earth’s shadow gradually covers the moon, the total eclipse will begin at 0741 UTC and last 72 minutes.

The U.S. space agency prepared a map showing how much of the eclipse will be visible from different parts of the world. The map is on the Internet at http://goo.gl/0ZsC.Unlike solar eclipses, which should not be looked at without protective glasses, lunar eclipses are perfectly safe for all to watch.Tuesday’s eclipse will not be visible in much of Africa, the Middle East and south Asia. South America, west Africa and northern and eastern Asia will see a partial eclipse of the moon.Lunar eclipses are not extremely rare. The last occurred about three years ago, and there will be two more in 2011. The rarity in this week’s alignment of the sun, moon and Earth lies in the fact that it coincides with the solstice. Scientists who went through centuries of records found only one other lunar eclipse in modern times, in 1638, that coincided with a solstice.Because the moon is at its highest point in the sky in the Northern Hemisphere on the winter solstice, experts said they expect particularly good viewing conditions in areas where skies are clear at the time of the eclipse – Voanews