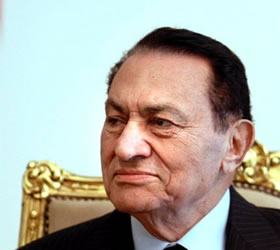 CAIRO: Egyptian President Hosni Mubarak on Sunday blamed Israel for the stalemate in peace negotiations with the Palestinians in a speech before a joint session of the Egyptian Parliament’s two chambers.Mubarak also warned Israel that the security of its people hinged on peace rather than “occupation or arms.” The Egyptian president, whose country has a 1979 pace treaty with Israel, also called on the United States and other Mideast peace brokers to “assume their responsibility” to break the stalemate in the peace process, lamenting that international efforts had fallen well short of what was needed.“Israel must take responsibility for the stalemate in the negotiations and realize that the security of its people depends on peace not occupation or arms,” Mubarak told lawmakers.

He singled out the construction of Jewish settlements on lands the Palestinians want for a future state as the main reason behind the stalemate.The talks are at an impasse in peace talks over the Israeli refusal to cease building settlements in areas wanted by the Palestinians for a future state.Israel has built dozens of settlements in the West Bank and east Jerusalem over the past four decades to buttress its control there. The international community considers the settlements to be illegal.Mubarak’s criticism of Israel is not unusual. Relations between Egypt and Israel have been cool for most of the 31 years since they signed their peace treaty. Their differences are mostly over lack of progress toward a regional peace accord – Arabnews