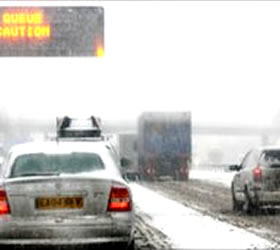 Thousands of people face further disruption to their Christmas travel plans as cold weather conditions continue to grip much of the country.British Airways is hoping 60 flights will depart Heathrow on Monday morning, but dozens more have been cancelled.BAA has apologised to people who were forced to sleep in the terminal but Transport Secretary Philip Hammond said aviation was a “safety-first business”.A man has died in hospital after falling through ice on a lake in Essex.The unnamed man, in his 30s, was dragged out of the lake at Rochford, near Southend, on Sunday afternoon but died later.Gatwick, Stansted, Edinburgh and Birmingham airports are open.Mr Hammond is to give a statement to MPs in the House of Commons later on the impact of the weather on the transport network.Meanwhile, the Met Office has warned of more snow and ice in many parts of the country.A “bitterly cold” day is forecast, with freezing fog.

Southern England and south Wales were among those in the “firing line” for Monday, said BBC weather forecaster Helen Willetts, with 5-10cm of snowfall that could coincide with both the morning and evening rush hours.The Wales Ambulance Service has warned of potential “long delays” in responding to 999 calls.There were also warnings of more heavy snow for much of Scotland and north-east England, with up to 10cm of snow expected in northern Scotland.The lowest UK temperature overnight, recorded in Chesham, Buckinghamshire, was thought to be -19.6C. Northern Ireland had another bitterly cold night, with -18C recorded at Castlederg in County Tyrone.Thousands of people were forced to spend another night at Heathrow with few flights departing on Sunday.Airport operator BAA said further cancellations and delays at Heathrow would be inevitable.

But many passengers were unhappy with their treatment.Sarah Randall, from Hertfordshire, said she was stranded at the airport with her husband, parents and three children – aged six to 11 – after their Cathay Pacific flight to Hong Kong was cancelled on Saturday morning.She said they slept on the floor on Saturday night and that her children were still traumatised by the experience.She complained: “The weather was beyond their control, I know, but my gripe is the disgraceful way all passengers have been treated and abandoned.”She said the family is now back at home after her husband walked through the snow to flag down a taxi on the M4 slip road but they are yet to find out if the £16,000 cost of their “dream trip” to Hong Kong and Bali will be refunded.Mr Hammond said he was aware of the “outrage” of passengers but he added: “We have had very extreme conditions and aviation is a safety-first business and the conditions at Heathrow have made it difficult for aviation to operate.”BAA spokesman Andrew Teacher told the BBC: “We had five inches of snow in an hour on Saturday afternoon and hundreds of planes parked when the snow came down. We have drafted in hundreds of people to clear the snow and thousands of people have been put up in hotels near the airport.

“Inevitably some people are at the airport and I’m not going to sit here and say it has gone well. We are extremely sorry for the disruption to people’s journeys.”People are in the lounges and all over the airport. We have given out thousands of blankets, food vouchers, bottles of water and there is free wi-fi. Things are improving slowly.”Mr Teacher said: “We are not trying to shun responsibility but Heathrow is not the same as an airport in Finland or Istanbul. If you had a Heathrow in Finland the same thing would happen. If you have 200 planes and five inches of snow you are going to get this.”He said the north runway was open but the south runway was still closed and staff were working “around the clock” to get it cleared.Mr Teacher also pointed out safety was the top priority and said: “If there was a crash or a plane skidded off the runway we would have people saying ‘why didn’t you close the runway?’.”There has been some disruption to rail travel on Monday as people return to work after the weekend.Some London-Leeds and London-York services were cancelled on the East Coast Main Line and there were long queues at St Pancras station for Eurostar services to the continent, which is also suffering from severe weather – BBC