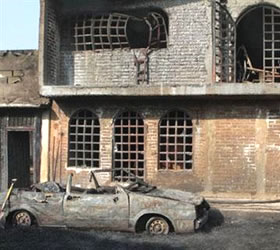 A state-owned oil pipeline has exploded in Mexico’s Puebla state, killing at least 22 people and destroying more than 30 homes.The Pemex oil company said Sunday’s explosion in the community of San Martin Texmelucan occurred at a duct where thieves were trying to steal fuel. At least 32 people were injured.Fire crews have managed to bring the fire under control. But photos from the area show a thick cloud of black smoke hanging over the accident site, and a number of people have evacuated their homes – Voanews