Snow at Heathrow and Gatwick ruins plans of thousands 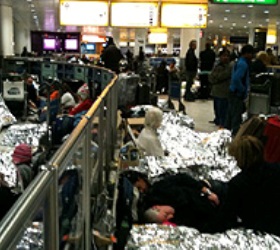 Thousands were stuck there overnight and few flights will depart on Sunday. Hundreds more slept at Gatwick, as knock-on delays hit most UK airports.

The Met Office warns of more heavy snow in Yorkshire, north-east England and eastern Scotland, advising essential travel only in the Edinburgh area.

Icy roads affect much of the rest of the UK. There is some rail disruption.

Up to 10cm (4in) are expected in other snow-affected areas, with up to 20cm on high ground.

Temperatures struggled to get above -5C (23F) overnight and BBC forecaster Matt Taylor said there were lows of -19C (-2F) in parts of Worcestershire and Shropshire. They are likely to stay below freezing throughout the day.

The Met Office also issued warnings of heavy snow in parts of Sussex, East Sussex and Kent on Sunday.

No trains are running between Oxford and Hereford, while some Chiltern Railways, South West Trains and First Capital Connect services have been weather-affected and there were delays of up to an hour on Eurostar.
Continue reading the main story
Around the UK

Drivers are facing queues of up to eight hours on the A34 in Oxfordshire, where more than 80 cars were abandoned on Saturday night and several jack-knifed lorries were blocking the route. The nearby Cherwell Valley services on the M40 has run out of fuel.

The M25 was closed in both directions between junctions five and six, causing long delays, after a liquid petroleum gas tanker overturned at 0900 GMT.

But airports were worst hit, on a weekend when travel association Abta said hundreds of thousands of Britons were due to fly.

The BBC has received hundreds of e-mails from stranded passengers, with many saying they have no idea where they will be spending Christmas.

BA said “several thousand” of its stranded passengers were being put up in hotels but when asked if the company was confident of getting everyone to their festive destinations, a spokeswoman said: “We are in the hands of the weather.”

People are advised against travelling to Heathrow Airport, which said “a few thousand” spent the night in the terminals. Just four short-haul and three long-haul flights were leaving on Sunday morning. It hoped to be operational on Monday.
‘Miserable’

Sue Kerslake spent the night on a terminal floor with her three young grandchildren after their Cathay Pacific flight to Hong Kong was cancelled.

“There were thousands of people in departures overnight and it got quite intense at times. The bars were open and some people were drinking and got quite nasty,” she said.
Continue reading the main story
Analysis
image of Simon Calder Simon Calder Travel Editor, Independent

“The closest comparison to Heathrow is Amsterdam (Schiphol) and that’s pretty miserable too. It’s not just us but it has been managed very very badly.

“BAA only at 0500 this morning announced there would be no arrivals in. By close of play today we are going to see something like half a million people flying to or from the UK who are not where they want to be.

“The lucky ones are the people whose holidays have been cancelled. They can just stay at home and watch Sports Personality of the Year or the final of The Apprentice.

“It’s the people who have been stuck, thousands of them, in foreign destinations. If they are with non-European airlines they have to fend for themselves, and of course there are many other people who are stranded in transit at Heathrow who arrived maybe yesterday morning, had no interest in staying here at all and are simply stuck.”

Stuart Gash, from Swindon, who had been due to fly to New York for a Caribbean cruise with his wife and two children, said UK airports seemed unable to cope at the first sign of snow.

Andrew Teacher, from Heathrow operator BAA, said it had invested more than £6m in the last year in technology to move snow and de-ice runways and that staff had worked through the night.

But he said: “There comes a point where you cannot do any more; when you’re moving snow and it’s freezing behind,” adding that many planes had been frozen into parking spaces.

He apologised for the “miserable” situation but said problems had been caused by “an extreme amount of snow in a very short space of time” and safety had to be prioritised.

Hundreds of staff had been drafted in to hand blankets, food and water to passengers stuck in terminals, he added, but many still complained to the BBC they had been left without.

The Independent’s travel editor Simon Calder said very few of the 400,000 passengers due to fly out of Heathrow this weekend would get to their destinations. At Gatwick, 90,000 people should fly out on Sunday but 50 fights are cancelled.

A Gatwick spokeswoman said it was doing everything it could to “get passengers on their way” but advised them to check with airlines before setting out.

Airports in Germany, France, Italy and the Netherlands are also suffering cancellations and delays.
Infrastructure ‘seized up’

Belfast International Airport has reopened after some of the heaviest snowfall for 25 years, although knock-on effects have caused delays.

Ryanair has cancelled 84 flights to or from UK airports, mainly in the London area.
Continue reading the main story

* Get the latest on travel problems and school closures via your local website
* Check if snow is forecast in your area at BBC Weather
* Details of motorway and local road closures and public transport disruption are available at BBC Travel News
* For advice on handling difficult driving conditions, see the Highways Agency website
* For information about severe weather warnings, see the Met Office website
* For information about staying healthy in the cold weather, see the NHS Winter Health website

“We have not coped well. The infrastructure – not just at the airports but the road infrastructure – completely seized up. The M25 going towards Heathrow and Gatwick virtually impassable within an hour of the snow starting to fall.”

Transport Secretary Philip Hammond has asked for expert advice on whether more taxpayers’ money should be spent planning for severe weather.

But shadow transport minister Maria Eagle accused him of complacency.

“We had a winter resilience report which was ordered by the previous government on his desk in July and he could have started by implementing the recommendations,” she said.

* Despite problems in some areas, National Rail Enquiries says most routes are operating normally and advises passengers to call 08453 017 641 for details
* The AA said it dealt with 16,000 calls on Saturday, compared with 9,000 on an average pre-Christmas Saturday
* Sunday’s sporting schedule was again badly affected, after wide postponements of football, rugby union and horse racing fixtures on Saturday
* An urgent appeal is being made for blood donors, particularly those who are O negative, as stocks are running low
* Companies have warned of a backlog of deliveries which may not reach customers before Christmas

The Highways Agency has said it is doing its best to keep major roads in England clear but that motorists should check traffic and weather conditions before considering whether to go out. – BBC News