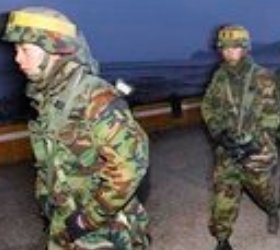 North Korea’s military has raised an alert for artillery units based along its west coast ahead of a planned live-fire drill by the South, Yonhap news agency said on Sunday, quoting a government source.

The report of the move raised tensions further on the Korean peninsula hours before the U.N. Security Council was due to meet in emergency session in a bid to cool tensions between the rival Koreas. Bad weather had so far delayed the South’s planned firing drill at a disputed border that has enraged Pyongyang.

The stand-off between the two Koreas has raised international concerns that their spat could quickly spiral out of control. Both sides have said they will use military means to defend what they say is their territory off the west coast.

“We understand that there’s been an upgrade in alert at artillery units,” Yonhap quoted the South Korean government source as saying.

China and Russia have called on both Koreas to avoid actions that could inflame tensions. Washington has backed Seoul’s push to go ahead with the planned live-fire drill on Yeonpyeong island, where four South Koreans were killed in an artillery attack last month.

The drill, within eyesight of the North Korean mainland, is scheduled to take place sometime before Tuesday.

Underlining international concerns, the Security Council will seek a way out of the crisis — described as “extremely precarious” and a “tinderbox” by U.S. and Chinese officials –at an emergency session in New York on Sunday at 11 a.m. EST.

“We believe that the Security Council must send a restraining signal to the Republic of Korea and DPRK (North) and help launch diplomatic activity with a view to resolving all issues of dispute between the two Korean sides by political and diplomatic means,” said Vitaly Churkin, Russia’s envoy to the United Nations.

The meeting may produce some kind of statement to help ease tensions.

North Korea has called the artillery fire drill by the South a suicidal war move that would trigger a full-out conflict on peninsula and said it would strike back in self-defense.

The South has said if was attacked in the same manner as last month, it would hit back hard with air power and bombs.

Analysts were skeptical the North would carry through with its threats to hit the South even harder than last month’s bombardment if shells landed in its territory again.

The North will likely respond by holding a live-fire drill on its side of the tensely guarded sea border, if the South goes ahead with its exercise, analysts said.

Weather conditions worsened on the normally sleepy island, which has been largely abandoned by residents after the November 23 attack.

The South Korean government, widely criticized at home for its perceived weak response to the shelling of the island, remained determined to carry out the exercise despite calls to reconsider.

“There is no plan to cancel the exercise. The factor we’re looking at is the weather condition,” a Defense Ministry official said on the condition of anonymity.

South Korean marines plan to test artillery firing from the island targeting its territorial waters to its southwest, the same type of exercise that North Korea last month called an attack and prompted its shelling of the island.

Concern mounted on the island among the few residents who remained, and anticipation was growing that the drill would take place on Monday.

“I see they have to do what they have to do, but the people here want peace and quiet,” Dan Choon-nam said, after a tearful church service. “We want things to be back to how they were.”

U.S. troubleshooter Bill Richardson, the governor of New Mexico who is on a private mission to Pyongyang, said he had made some progress in his discussions with officials there.

He told CNN he did not get a firm answer on whether North Korea would physically strike the South again, but added: “It’s still very tense out there.”

“They said there would be a response, but at the same time they hope a U.N. Security Council resolution would tamp down the situation. It was very clear they were very upset by the potential exercise,” Richardson told CNN from Pyongyang.

North Korea continued with a blistering assault on the South and the United States at the weekend, accusing Seoul of conspiring with Washington to bring hostility against it.

The North’s foreign ministry spokesman said in a statement: “We will be sure to settle scores with the U.S. for the extreme situation on the Korean peninsula.” He added: “Our military does not speak empty words.” – Yahoo News