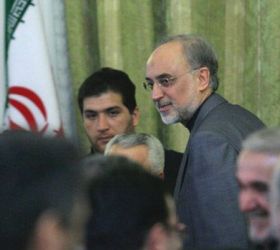 Iran’s nuclear chief replaced the country’s sacked foreign minister Saturday and said his top priorities include building a “special relationship” with Saudi Arabia, an announcement that appeared meant to ease suspicion and concern across the Gulf about Iran’s nuclear program.

Ali Akbar Salehi, who still heads the Atomic Energy Organization of Iran, said he also wanted stronger ties with key ally and growing regional player Turkey and with China and Russia — two nations whose veto power on the UN Security Council is crucial to Tehran’s battle to ward off more sanctions.

Salehi also reached out to the European Union, in a shift from Iran’s usual stance toward the West.

“In spite of the EU’s illogical, unprincipled and unjust behavior, still EU members are pursuing dignified relations with Iran for many reasons, including the energy issue,” the official IRNA news agency quoted Salehi as saying. “Should the EU change as soon as possible its method of confrontation into one of cooperation, it will be in the interest of both parties.”

The United States and some of its key allies believe Iran is using its civil nuclear program as a cover to develop atomic weapons. Iran has denied the charges, saying its nuclear program is geared toward generating electricity and producing medical isotopes for patients.

The doubts over Iran’s true aims are shared by the United States’ allies in the Gulf. The leaders of six Gulf states — including Saudi Arabia, Kuwait, the United Arab Emirates, Oman, Bahrain and Qatar — said this month they are watching Iran’s nuclear ambitions with “utmost concern” and appealed to the West for a greater voice in the renewed talks with Tehran.

Salehi, who was introduced as the new top diplomat at a Foreign Ministry function on Saturday, indicated he wanted to ease those worries.

“Saudi Arabia deserves to enjoy special political relations with Iran. Iran and Saudi Arabia are two effective regional countries in the Islamic world which can resolve many problems together,” IRNA quoted Salehi as saying at the function.

Salehi also looked forward to stronger ties with Turkey. Ties between Iran and Turkey have grown in recent months with Ankara endorsing a nuclear fuel deal for Tehran in May, along with Brazil.

Turkey is also hosting the next round of talks between Iran and the six world powers in Istanbul, following the last negotiation held in Geneva on Dec. 6 and 7. Turkey has repeatedly called for sustained diplomacy to resolve Iran’s nuclear controversy.

“Turkey is a powerful country with strategic position and shares common cultural and ideological grounds with Iran,” Salehi said.

President Mahmoud Ahmadinejad abruptly fired his longtime foreign minister, Manouchehr Mottaki, on Monday while he was in the middle of a visit to Senegal. He gave no public explanation.

Iranian media reports over the past year have said that some lawmakers believed Mottaki was not a forceful or persuasive enough advocate for Iran on the world stage. – Arab News