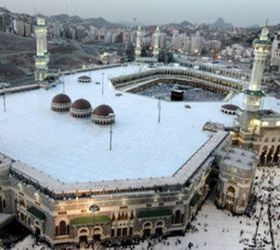 JEDDAH: Studies have been conducted on prospects of establishing an inner-city monorail system for the holy city of Makkah to facilitate transportation of pilgrims and worshippers to the Grand Mosque and reduce traffic congestion in the city.

“We have proposed this project as part of our efforts to introduce advanced and safe transport systems in Makkah,” said Adnan Gutub, director of the Center of Research Excellence in Haj and Umrah, at Makkah’s Umm Al-Qura University.

The project is significant as it would provide additional transport means for the hundreds of thousands of pilgrims and worshippers who come to the city every day and help reduce traffic jams.

Gutub did not give details of the project as it is still at the planning stage. Along with the ongoing projects of Mashair Railway and Haramain Railway, the new monorail system would contribute to further smoothing traffic in the holy city.

The first phase of the Mashair Railway linking the holy sites of Mina, Arafat and Muzdalifah was opened for the use of domestic and GCC pilgrims during Haj this year. Most pilgrims said it was a fantastic addition to Haj facilities in the holy sites.

Work is progressing well on the Haramain Railway that links Makkah, Madinah and Jeddah. The high-speed trains will cover the distance between Makkah and Jeddah in half an hour and between Jeddah and Madinah in two hours.

A meeting will be held at Umm Al-Qura University on Sunday and Monday to discuss prospects of implementing monorail and cable car systems in Makkah and other holy sites. Experts from Toronto University and Monash University in Australia will attend the talks.

In a report carried by the Saudi Press Agency, Gutub said his center conducted eight research projects this year. These studies covered pedestrian movement in the central regions of Makkah and Madinah, ideal transport means for the two cities and crowd management at Mashair Railway stations.

“The center has carried out scores of studies and research on the sanitary environment during Haj and Umrah seasons by studying infectious diseases among pilgrims and working to prevent their spread,” Gutub said.

“We have also studied the psychological effects of extreme congestion on pilgrims and air pollution in Makkah, Madinah and the holy sites. We have made immense contribution to the design and development of the Jamrat Bridge in Mina,” he added.

Gutub highlighted the center’s efforts in ensuring the safety of the millions of pilgrims and improving the various services provided by public and private agencies.