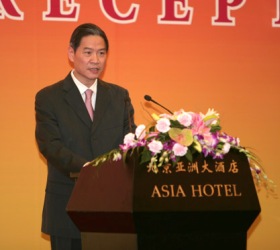 Chinese Vice Foreign Minister Zhang Zhijun said Saturday that China is deeply worried about the situation on the Korean Peninsula, which is extremely precarious, highly complicated and sensitive.

Zhang made the remarks in a statement on China’s stance on the situation.

He said China had repeatedly told the parties that if blood were shed on the Korean Peninsula, the peoples on the two sides of the peninsula would be the first to suffer.

Zhang said bloodshed and conflict would lead to the national tragedy of fratricide among compatriots and brothers of the Democratic People’s Republic of Korea (DPRK) and the Republic of Korea (ROK), harm regional peace and stability, and affect neighboring countries.

China had made unremitting efforts with the DPRK, the ROK and other parties through various channels to avoid escalation of the situation, he said.

Chinese State Councilor Dai Bingguo made an urgent visit to the ROK from Nov. 27 to 28 and the DPRK from Dec. 8 to 9.

During his candid and thorough talks with leaders of the two countries, Dai had urged the two sides to maintain calm and show restraint, conduct talks and engagement, and avoid any activity that could worsen the situation, Zhang said.