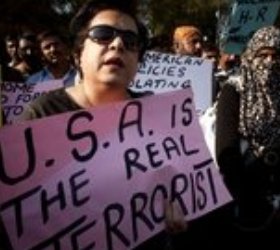 Pakistan’s top spy agency denied Saturday that it helped unmask the CIA’s station chief in Islamabad, dismissing speculation it was retaliating for a U.S. lawsuit linking the Pakistani intelligence chief to the 2008 attacks in Mumbai, India.

An official with the Pakistani spy service warned that such allegations risk raising tensions between the already uneasy allies.

The CIA ordered its station chief out of Pakistan because his life was threatened after a Pakistani legal complaint revealed his name. His recall comes at a delicate time, as the White House presses Islamabad to rid its lawless tribal regions of safe havens for militants fighting in Afghanistan, where the U.S. is grappling with an exit strategy.

The station chief’s name was revealed by a Pakistani man threatening to sue the CIA over the deaths of his son and brother in a 2009 U.S. missile strike. The attorney involved with the legal complaint said he learned the name from Pakistani journalists. Pakistan’s spy agencies have kept ties to a number of Pakistani journalists as a way to influence coverage.

Questions have arisen as to whether a civil lawsuit filed last month in Brooklyn in connection with the 2008 Mumbai attacks may have raised tensions with Pakistan and spurred it to retaliate. The lawsuit lists Gen. Ahmed Shuja Pasha, the head of Pakistan’s Inter-Services Intelligence, as a defendant and accuses the ISI of nurturing terrorists involved in the Mumbai attacks, which left 166 people dead.

The Pakistani intelligence official dismissed any claims of ISI involvement in exposing the CIA official as “a slur.” He declined to offer any comment on the Brooklyn lawsuit and said it was entirely possible Pakistani journalists simply figured out the station chief’s identity on their own.

Such “unfounded stories can create differences between the two organizations,” the official warned.

He also said the CIA has not directly accused the ISI of any wrongdoing in the matter. Like other intelligence officials, he requested anonymity because of the sensitive nature of his work and because he is not authorized to speak to media on the record.

The Associated Press learned about the station chief’s removal on Thursday but held the story until he was out of the region.

The CIA’s work is unusually difficult in Pakistan, an important but at times capricious counterterrorism ally.

The station chief in Islamabad operates as a virtual military commander in the U.S. war against al-Qaida and other militant groups hidden along the Pakistan-Afghanistan border. The chief runs the Predator drone program targeting terrorists and handles some of the CIA’s most urgent and sensitive tips.

The station chief also collaborates closely with Pakistani intelligence. The alliance has led to strikes on key militant leaders but has also been marred by spats between the two agencies. During the first term of President George W. Bush’s administration, Pakistan almost expelled a previous CIA station chief in a dispute about intelligence sharing. – Yahoo News