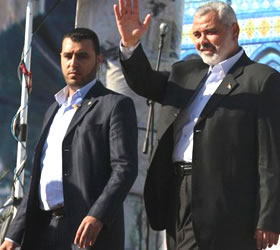 GAZA: A large crowd of Palestinians cheered a Hamas leader’s pledge on Tuesday never to recognize Israel and celebrated the movement’s 23rd anniversary at a Gaza rally punctuated by sonic booms from Israeli jets.Hamas leader Ismail Haniyeh, whose group runs the Gaza Strip, said the Palestine Liberation Organization (PLO) headed by Western-backed President Mahmoud Abbas had made a “historic mistake” by recognizing Israel.“We said it five years ago and we say it now… we will never, we will never, we will never recognize Israel,” Haniyeh told the gathering which some organizers said was attended by around 250,000 people.Haniyeh had raised speculation last month about a change in Hamas’s charter, which calls for Israel’s destruction, by suggesting the group could accept a referendum on any peace treaty giving the Palestinians a state on land Israel captured in a 1967 war.But he said such a truce would entail “no recognition of Israel and no concessions over any part of the land of Palestine.”In his speech, Haniyeh challenged critics and local surveys which said Hamas’s popularity was in decline over poor governance in Gaza.He voiced confidence that Hamas, which defeated Abbas’s Fatah movement in a 2006 election and seized the Gaza Strip in 2007 from forces loyal to the Palestinian leader, would win any future ballot – Arabnews