NHS and social services tested to limit by cuts – MPs 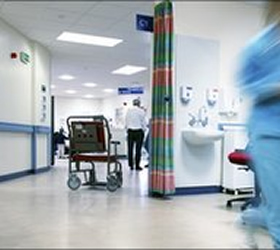 Government spending plans will test the NHS and social services in England to the limit, according to a report by the Commons Health Select Committee.The MPs say the plans assume efficiency savings on a scale never before seen in the NHS, or in other countries.Stephen Dorrell, who chairs the committee, said the NHS had to save 4% a year for four years – a “huge ask”.But Liberal Democrat Health Minister Paul Burstow said NHS staff were already making savings.NHS chief executive Sir David Nicholson has estimated the health service needs to make efficiency savings of between £15bn and £20bn over the next four years.Mr Dorrell, a former Conservative health secretary, told BBC Radio 4’s Today programme that in real terms, the NHS budget was being broadly maintained, but: “We’re having to find ways of doing more with the same amount of money.”The NHS could only do that if equivalent gains were made in social services departments, he said – otherwise vulnerable people may find themselves falling back on the health service unnecessarily.

He said the committee had asked many experts in the world of health and local government about the challenge of making savings while maintaining standards.”Nobody has told us it’s impossible. Everybody has said it is extremely challenging.”John Appleby of health think tank the King’s Fund said the budget was apparently shrinking despite having been ringfenced in the Spending Review.He said this was because the NHS had been granted a “very small real increase” over four years in the review, but since then revised inflation forecasts had turned that increase into a “very small real cut”.The NHS, however, had estimated that it needed a rise of up to 4% in real terms – partly to cover increasing demand from the changing population, and partly to increase the quality of services.’Not at its best’The committee calls for the Department of Health to deliver a “credible plan” on where the efficiency gains will be made.Mr Burstow said cost-saving measures already under way included reducing the length of stays in hospital, reducing the number of unplanned and unscheduled attendances at A&E departments and reducing hospital infections.”All of these things, by relentless focus on quality, actually save resources,” he said.

He added: “In the last 13 years the approach hasn’t been particularly focused on efficiency or effectiveness, it’s been focused on pouring more money into the NHS and hoping that we got better results.”We know we haven’t achieved that. If you look at cancer survival rates, mortality rates in respect of heart attacks and so on, the NHS is not performing at its best.”The committee also looked at adult social services because of significant crossover between care services and the NHS.The report says the Local Government Spending Review “cannot fail to pose a challenge for the successful delivery of social care”.The committee also raises concerns about the costs of the government’s reorganisation of the NHS, arguing they have not been clearly laid out.’Real anxiety’A Department of Health spokesman said the government was committed to sustaining and improving services, but efficiency savings were needed.”We have been clear that the NHS must cut back on bureaucracy, not on front-line care.”

The spokesman said additional funding for social care worth £2bn would be available by 2015.”This additional investment will make it possible to protect people’s access to care, without tightening eligibility.”Nigel Edwards, acting chief executive of the NHS Confederation, which represents 95% of organisations that make up the NHS, said there was “real anxiety” among leaders about how to cope with efficiency savings, major management cuts and radical structural reforms. And the Association of Directors of Adult Social Services also warned that some tough years lie ahead.”Social services directors will make every efficiency saving that they capable of,” said president Richard Jones.

“But I fear that, as Members of Parliament have confirmed today, it will be impossible in some authorities to maintain the standards of care we provide without restricting eligibility for those services.”Shadow health secretary John Healey said the committee was right to flag up its concerns about both the NHS and adult social care – and questioned the government’s planned reorganisation of the NHS.”The last thing the NHS needs is a high-cost, high-risk reorganisation at a time when, in the government’s own words, it is attempting to make ‘unprecedented’ efficiency savings,” he said.On social care, he said, “ministers are trying to pull a fast one in suggesting that councils will be in a position to sustain current eligibility levels” – BBC