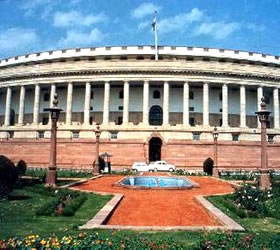 NEW DELHI:India’s opposition plans to step up its anti-graft campaign that paralysed the parliament session that ended Monday, spelling trouble for the ruling coalition’s ability to pass bills in the February budget session.The winter session of parliament was the least productive since 1985, with less than 6 percent of parliamentary time spent on bills after the opposition blocked proceedings to demand a probe into a telecoms scam that may have cost India $39 billion.The Hindu nationalist Bharatiya Janata Party’s insistence on a parliamentary probe in return for allowing proceedings will make it tough for the Congress-led government to pass the 2011/12 federal budget and reforms such as measures to ease land acquisition by industry.There is little danger that the government will be unable to pass the budget and be forced to resign, but keeping together the loose coalition and contesting several upcoming state elections could push policymaking into further limbo.“The country is at a deadlock and the polarisation will continue. Each (party) is getting ready as if they are going to polls,” said N. Bhaskara Rao, chairman of think-tank Centre for Media Studies, said.

“They (Congress) are groping in the dark, looking for ideas.”Congress has frittered away much of the political capital from its 2009 re-election, trying to limit damage from a series of setbacks like high food prices, corruption scandals, internal revolts and a poor show in the Bihar state election.Underlying the drift is a lack of coherence within the government and the party on what policy should look like. Analysts say party chief Sonia Gandhi does not step in quickly enough, while Prime Minister Manmohan Singh has largely been aloof from domestic policy.In Andhra Pradesh state, for instance, which provides the single largest block of Congress lawmakers, the party dithered for months before expelling several leaders who had revolted against the appointment of a chief minister.Congress is also in the midst of succession from Sonia Gandhi to son Rahul Gandhi, but some worry he may not be ready for the job. That feeling was intensified after the party’s poor performance in Bihar despite Rahul’s campaign in the state.“Whether they will be able to win polls with the new brand name Rahul, that’s the analysis that is going on,” Rao said.As Monday’s session ended, BJP members streamed out of the chambers to shout slogans against the government on the lawns of parliament and said they would stall proceedings in the budget session too if the government did not give in to their demands.

The logjam forced Finance Minister Pranab Mukherjee to ram through a $9.8 billion spending bill needed to finance running the government and Congress leaders worry the continued impasse could lead to a repeat for passing the federal budget.“Sometimes business not proceeding also yields results,” top BJP leader Lal Krishna Advani said.The BJP and its allies will met on Tuesday to chart out their strategy in the months to come and said they would organise a protest march on Dec. 22 against corruption.Sonia Gandhi has backed Singh, saying the government had done all it could to investigate corruption charges.“(We should not) do anything that will denigrate the institution of the prime minister. We cannot sacrifice institutions at the altar of political expediency,” she told her party’s lawmakers.Parliamentary Affairs Minister Pawan Bansal said deadlock in the budget session could lead to a “constitutional crisis.”“I hope reason will prevail and they (opposition) will return to the house,” he told reporters.Among reforms that could be hit by the deadlock are the introduction of a goods and services tax and the direct taxes code, which are seen as boosting the economy and reducing corporate tax burden – Kahleejnews

UAE firms to invest $1.3b in Pakistan