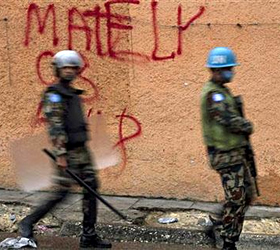 U.S. Secretary of State Hillary Clinton says the Haitian government must do more to help resolve the crisis sparked by disputed presidential elections in the impoverished nation.Clinton said Monday that a key U.S. senator’s call for the freezing of U.S. aid to Haiti should send a “very strong signal” that the United Staes expects more from the country.Clinton spoke in Wakefield, Quebec, where she was meeting with her Mexican and Canadian counterparts.Democratic U.S. Senator Patrick Leahy called Friday for a freeze on U.S. aid to Haiti and a denal of travel visas to its top officials until the election problems are resolved.In Haiti, thousands of people, many of them supporters of the third-place finisher, Michel Martelly, took to the streets of Port-au-Prince and elsewhere in protest, after the results were announced last week – starting fires, throwing rocks and setting up barricades.  Days of rioting left at least five people dead.

In a statement, Leahy alleged that those in power in Haiti are trying to subvert the will of the people in the earthquake-ravaged country.   He said the United States must come down squarely in support of the Haitian people’s right to choose their leaders freely and fairly.Two of the three top candidates in the disputed election have rejected a planned recount of the vote.Martelly, a popular musician who finished third by less than 1 percent in the November election, dismissed the electoral council’s proposed recount as untrustworthy.The candidate with the highest vote tally, Mirlande Manigat, said she is rejecting the review because its procedures are unclear.As things stand, Manigat will compete in a runoff election on January 16 against ruling party candidate Jude Celestin.  As the third place candidate, Martelly would not move on to the second round.

The United Nations Security Council has called on all sides in Haiti to end the violence.  The council also called on all political forces to work through the electoral process to ensure that the will of the people is reflected in the outcome.Protesters have accused the ruling coalition of rigging the results of the November 28 election.Haiti is the Western Hemisphere’s poorest country.  It is struggling to recover from a January earthquake that left more than 200,000 people dead and 1 million others homeless.  The country is also dealing with a cholera outbreak that has killed about 2,000 people – Voanews

NHS and social services tested to limit by cuts – MPs

NHS and social services tested to limit by cuts - MPs