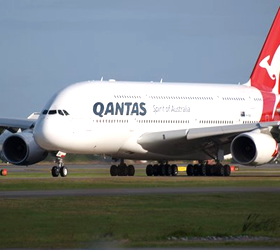 The Australian airline Qantas has grounded its six-strong fleet of Airbus A380 airliners after one of the superjumbos made an emergency landing.Qantas flight QF32 experienced engine trouble shortly after taking off from Singapore on its way to Sydney.One of the engines “exploded with a loud bang” and the plane started shaking, a passenger told the BBC.Pieces of debris believed to be from an aircraft were found on the nearby Indonesian island of Batam.Qantas said the plane, with 433 passengers and 26 crew on board, experienced an “engine issue” over western Indonesia shortly after taking off from Singapore time at about 1000 (0200 GMT).”It’s a significant engine failure,” Qantas Chief Executive Alan Joyce said at a news conference.“We do take our safety reputation and our safety standards unbelievably seriously. And we’re not going to take any risks with passenger safety – and as a precaution, we’re suspending the flights of the A380 aircraft until we’re comfortable that we understand the reasons for this.”No-one was injured during the incident, which ended at Singapore’s Changi airport.Smoke billowed from the aircraft, which aviation experts say is capable of flying on two engines.One of the engines was blackened and its rear casing was missing. “I was on the plane right next to engine two, which exploded with a loud bang within the first 10-15 minutes of take-off,” Lars Sandberg – a DJ who was travelling to Sydney to begin a music tour of Australia – told the BBC.

“I thought that something had fallen down in cargo underneath the plane, but the plane started shaking… I’m a little bit shaken up. I travel a lot and this is the first big scare I’ve had.”The captain did a good job though in reassuring us, making announcements every few minutes.”One eyewitness quoted by AFP news agency spoke of seeing a “little bit of fire” coming from the stricken engine.Passengers said the pilot spent at least an hour and a half circling and discharging fuel ahead of the emergency landing.”When we got off and saw the engine itself and the back casing burnt off, that was pretty scary,” Mr Sandberg said.”I’m just happy to be alive and safe in the terminal building.”On the Indonesian island of Batam, witnesses said they heard an explosion as the plane flew overhead.”There were metal shards coming down from the sky into an industrial area in Batam,” eyewitness Noor Kanwa told the AFP agency.

The BBC’s Nick Bryant in Sydney says aviation experts have identified the debris as part of a Qantas engine casing, but that the airline has not confirmed this.Qantas said the grounding of its A380 fleet would be followed by a full investigation.The grounding will mean inconvenience for thousands of passengers who had been scheduled to fly on the aircraft – while those aboard the stricken aircraft may also have a significant wait ahead to get to their destinations as there are so many of them to find alternative flights for, correspondents say.Other A380 operators Singapore Airlines, Air France-KLM, Lufthansa and Emirates reportedly said they had no plans to ground their fleets.Qantas had no immediate comment on whether the incident might be related to eruptions of Indonesia’s Mount Merapi over the past 10 days – which have prompted some flights above the volcano to be suspended – Bbc

shell pakistan limited unexciting despite respite from to tax reduction