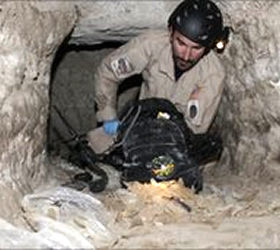 US and Mexican police have discovered a tunnel used to smuggle drugs across the California-Mexico border.The tunnel, which was more than 500m long (1,640ft), had a rudimentary rail system, ventilation and lighting.US police also found some 20 tonnes of marijuana, while their Mexican colleagues seized several tonnes.They said the tunnel connected a warehouse in Otay Mesa with one in Tijuana in Mexico, the main gateway for drugs entering California.It was believed to be in operation for only a brief time, a US customs official told the Associated Press.Police say drug traffickers build the tunnels to bypass ever more stringent controls aimed at curtailing the cross-border trade in illegal drugs and guns.In 2006, police discovered a 731m (2,400ft) tunnel, the longest found so far, also linking Otay Mesa with Tijuana – Bbc