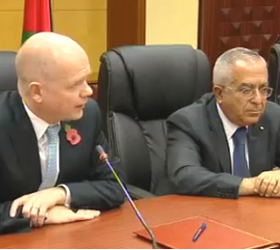 Israel is postponing “strategic dialogue” with Britain over defence and security issues, an Israeli Foreign Ministry spokesman has said.The move is a protest over attempts to use British law to prosecute visiting Israeli officials, the spokesman added.The news comes on the first day of an official visit to Israel by the UK’s Foreign Secretary William Hague.The Foreign Office said the British government was moving to curb the use of “mischievous” arrest warrants.Mr Hague will also be visiting the occupied territories during his visit.An arrest warrant was issued through UK courts for Israeli former Foreign Minister Tzipi Livni in December last year. The warrant was granted by a London court at the request of Palestinian plaintiffs, provoking Israeli anger.
It was revoked when it was found Ms Livni was not visiting the UK.The Israeli Foreign Ministry spokesman denied that the latest development was a deliberate “ambush” to humiliate Mr Hague.Earlier this week it was reported that Israel’s Intelligence Minister, Dan Meridor, cancelled a trip to Britain amid concerns that he risked being arrested on war crimes charges.Israel has expressed anger that, in the past, ministers and senior military figures have had to cancel visits to the UK because of concerns that pro-Palestinian groups might use the courts to seek their arrest over Israeli military action in Gaza, or this year’s raid on a Gaza-bound aid ship in which nine Turkish activists were killed.

Pro-Palestinian campaigners have tried several times to have Israeli officials arrested under the principle of universal jurisdiction, which holds that some alleged crimes are so grave that they can be tried anywhere, regardless of where the offences were committed.The BBC’s Wyre Davies said the news that Israel was postponing an annual round of strategic talks with Britain was potentially embarrassing, even though the Conservatives have already promised to amend those laws which could expose visiting Israeli politicians to arrest.The Israeli Foreign Ministry said the issue would be at the top of the agenda during Mr Hague’s visit.

A Foreign Office spokeswoman said: ‘We share Israeli concerns about the current universal jurisdiction arrangements which inhibit Israelis visiting the UK without fear of mischievous arrest warrants.”That’s exactly why the government is moving as quickly as possible to amend them. A written ministerial statement was tabled to parliament in July and legislation will be tabled in the very near future. We remain committed to the strategic dialogue with Israel and have an ongoing dialogue on a whole range of issues including Iran.”We are discussing dates for the next round of the strategic dialogue with Israel – Bbc