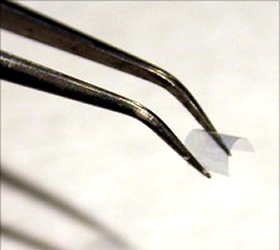 Scientists in the UK have demonstrated a flexible film that represents a big step toward the “invisibility cloak” made famous by Harry Potter.The film contains tiny structures that together form a “metamaterial”, which can, among other tricks, manipulate light to render objects invisible.Flexible metamaterials have been made before, but only work for light of a colour far beyond that which we see.Physicists have hailed the approach a “huge step forward”.The bendy approach for visible light is reported in the New Journal of Physics.Metamaterials work by interrupting and channelling the flow of light at a fundamental level; in a sense they can be seen as bouncing light waves around in a prescribed fashion to achieve a particular result.
But light waves can only be herded around by structures about the size of their wavelength – a property which is connected to their colour.Until now, the most striking demonstrations of invisibility have occurred for light waves with a much longer wavelength than we can see. This is because it is simply easier to construct metamaterials with relatively large structures.Even flexible metamaterial films have been shown off for this high-wavelength range.For the far shorter waves we can see, a metamaterial requires structures so tiny – nanostructures – that they push the boundaries of manufacturing.
“The first step is imagining first of all that this could be done,” said Andrea Di Falco of St Andrews University, the author of the paper.”All the typical results have been reached in flat and rigid surfaces because this is the legacy of the procedures used to create nanostructures.”

So instead of building the typical stacks of the “fishnet” structures on hard, brittle silicon, Dr Di Falco used a thin polymer film.”Typically what you do is stack several layers of fishnet structures and this all together will give you a metamaterial,” Dr Di Falco explained.”What I’ve done here is fabricate a single layer – I lift it off so that at the end I am left with a self-standing membrane – and show that it has the properties required to create a 3D flexible metamaterial.”Ortwin Hess, a physicist who recently took up the Leverhulme Chair in Metamaterials at Imperial College London, called the work “a huge step forward in very many ways”.”It clearly isn’t an invisibility cloak yet – but it’s the right step toward that,” he told BBC News.

He added that the next step would be to characterise the way that the material’s optical properties change as it is bent and folded.If the properties were sensitive to the movement, it may be useful for next-generation optics and lenses in, for example, handheld cameras.If instead they were impervious to bending and motion, the invisibility cloak could be that much closer – but Professor Hess added that is still some way off.”Harry Potter has to wait still – that’s the huge goal,” he said.”So far he’s had to live in a house and now he can live in something like a tent; it’s not the cloak that adjusts to his shape, but it’s a bit more flexible. Now we have to take the next step forward.” – Bbc