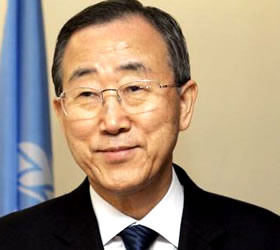 BEIJING : United Nations Secretary General Ban Ki-moon and Chinese Premier Wen Jiabao attended the Summit Forum on the sidelines of the Shanghai World Expo, which is set to be closed later on Sunday.The Shanghai Expo is held in a developing country for the first time, drawing 246 participated countries and international organizations, as well as more than 70 million visitors, reports state media.London hosted the first Expo in the Crystal Palace of Hyde Park in 1851.Ban Ki-moon said at the forum that the Chinese government, the City of Shanghai and the International Bureau of Expositions deserve the highest praise as the Shanghai World Expo brought nations together and celebrated global diversity.“Since May of this year, all around the world, people have been talking about a remarkable, even historic event,” Ban said.Wen Jiabao said the Expo 2010 Shanghai China had been a splendid event and added a glorious chapter to the Expo history.Calling the event “eye-opening” and “unforgettable”, the Premier said since the Expo opened on May 1, there have been more than 70 million visits, a record high in the Expo history. For the first time, a virtual Expo was launched, opening a new window for more people to be part of the Expo, he said.“Undeterred by the searing heat or soaking rain, they (visitors) waited patiently in long lines to witness this much anticipated event… Through such extensive participation, Expo 2010 Shanghai has truly brought together people around the globe,” he said.Within a land area of six square kilometers, the Expo Site has become a global village where people could not only see on display rare cultural treasures of the world, for example, the bronze chariot and horse sculpture from China’s Warring States period, the statue of Athena from Greece and the masterpiece of French impressionist painters, but also got a taste of the quintessence of the world’s diverse cultures through more than 20,000 cultural events, according to Wen.

Taking the Expo as a “convincing proof” that equality and harmony is the common aspiration of mankind, Wen mentioned the 14 Pacific island countries and 12 Caribbean countries which had made their first collective presence at the 159-year-old event.“Some are new to the World Expo and some do not yet have diplomatic relations with China. Yet they all participated with great interest and enthusiasm. This is a good example which shows that the World Expo is above national, ethnic and religious boundaries,” said he.
“The Expo has brought together the Chinese people who wish to learn more about the world and foreign friends who wish to know more about China. Thanks to the Expo, they have forged a strong bond of friendship,” said Wen.Wen said that the Expo Shanghai, the first to feature city as its theme, would leave behind a “rich spiritual legacy” and “a constant source of inspiration” for the future of mankind because more than half of the world population now live in cities.“The success of the Expo has strengthened China’s confidence and resolve to pursue reform and opening-up. China will unswervingly follow the path of peaceful development and stay open and inclusive,” he said.

The Summit Forum, co-hosted by the Shanghai World Expo organizing committee,
the United Nations, and the International Expositions Bureau (BIE), focuses on “Urban Innovation and Sustainable Development”.The forum, the highest-level event in the series of Expo forums and the finale of the six-month Expo, calls for joint efforts in tackling the growing challenges of urbanization.“I hope that China will be an urban pioneer,” Ban Ki-moon said, adding that he looks forward to working more closely with China across the sustainable development agenda.Vicente Gonzalez Loscertales, Secretary-General of BIE said at the forum that the Expo has inspired a mindset of cooperation, solidarity and openness which are essential to tackle the major challenges facing humanity.“Shanghai 2010 has truly materialized the vision of the World Expos of the 21st Century,” he said – App