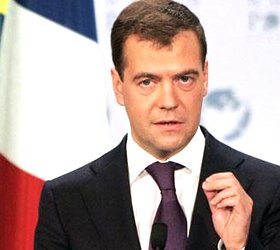 MOSCOW: Militants wearing suicide vests on Tuesday stormed and seized Parliament of Russia’s strife-torn Chechnya  region, killing at least three policemen and injuring 17 others as they held lawmakers and officials hostage, before being eliminated in a standoff with security forces.Four militants were involved in the attack, which began “when a vehicle carrying terrorists drove in on the tail of a car carrying a member of Parliament into the highly-protected compound,” Interfax reported quoting police sources.Three policemen were killed and 17 wounded in the militant attack on the Parliament building in the provincial capital of Grozny in the restive Caucasus republic of Chechnya, media reports said.All the four attackers were also killed — two of whom blew themselves up while two were shot dead by the security forces, ITAR-TASS reported quoting Interior Ministry sources.State-run Rossiya 24 TV channel said there were no civilian casualties.President Dmitry Medvedev, who is on a visit to France, and Prime Minister Vladimir Putin, who is in Moscow, were briefed on phone by the pro- Moscow Chechen head Ramzan Kadyrov.Kadyrov told the Interfax news agency that Chechen security forces killed the militants in an intense 20-minute operation to kill the militants and free the deputies or lawmakers and employees from the building.

“All deputies are alive and were taken from the territory of the Parliament building to safety,” Kadyrov was quoted as saying.Deputy chief of Chechen interior ministry, Roman Edilov, said two police officers were among the dead. He, however, denied that the militants had taken hostages, RIA Novosti said.Federal interior minister Rashid Nurgaliyev, who is currently in Grozny, lauded the professionalism of the commando team in operation to eliminate the terrorists,Russia fought two wars with Chechen separatists in the 1990s before installing a loyal government there in 2000. In recent years, Grozny has seldom witnessed terror attacks.However, a shootout between Kadyrov’s guards and suspected insurgents left 19 people dead in his village in August – Timesofindia