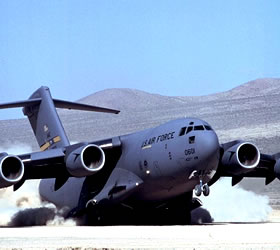 NEW YORK: India is in negotiations to buy as many as 10 Boeing Co. military transport aircraft ahead of U.S. President Barack Obama’s visit next month, according to American media reports.“Talks are going on,” Sitanshu Kar, a spokesman at India’s Ministry of Defence, was quoted as telling Bloomberg News by phone on Monday from New Delhi.The U.S. Defence Security Cooperation Agency has notified Congress that it may permit the sale of 10 C-17 Globemaster III aircraft to India, the report said.
The sale may be valued at as much as $5.8 billion, it said. Boeing, the second-largest U.S. defence contractor, expects to bid for $31 billion worth of military contracts in India in the next 10 years as it competes with Lockheed Martin Corp. and other suppliers for orders following a tripling of the nation’s defence budget.Ties between the U.S. and India have grown since 2005 when former President George W. Bush and Indian Prime Minister Manmohan Singh signed a civilian nuclear technology agreement. “India’s defense procurement budget is quite huge”. Laxman Kumar Behera, a research fellow at the Institute for Defence Studies & Analyses in New Delhi, was quoted as saying.
The U.S. arms industry has become quite interested in the Indian defence market.
The government plans to spend 1.47 trillion rupees ($33 billion) on defense in the fiscal year starting April 1, Finance Minister Pranab Mukherjee said in February. Military spending has been growing 10 percent every year, Behera said. â€œThe negotiations are going well between the two governments, Vivek Lall, vice president for Chicago-based Boeing’s defense business in India, said about the C-17 order. The C-17 deal will be the largest defense order for Boeing from India, he said. Boeing plans to compete to supply fighter jets, maritime patrol aircraft, helicopters and military transport planes that may be worth as much as $31 billion, Dinesh Keskar, president of the company’s India unit, said in February. The aircraft maker is turning to international exports to boost sales as U.S. defence spending slows, the report said. It’s competing with Lockheed Martin, Dassault Aviation SA, Moscow-based United Aircraft Corp., and European Aeronautic, Defense & Space Co. to supply India with 126 fighter jets, the world’s biggest defence contract in 15 years. India is buying the fighters as it has been phasing out Russian-built MiG jets, some of which date back to the 1970s. Boeing and larger rival Lockheed Martin made their first defence sales to India in the past 2 ½ years as the country boosts its military and civil-nuclear relationships with the U.S. Last year, Boeing won an order from India to supply eight P-8I long-range maritime reconnaissance aircraft – App