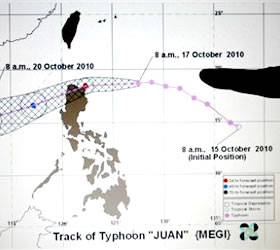 The northern Philippines was lashed by heavy rains and strong winds from super typhoon Megi on Monday morning, and forecasters said the center of the storm was expected to make landfall before noon (12 a.m. EDT).Megi, the 10th and strongest typhoon to hit the Philippines this year, had slowed and changed course slightly overnight to be tracking west southwest, delaying its expected arrival in north Luzon, the country’s main island, the state weather agency said.At 6 a.m. (2200 GMT Sunday), the typhoon was 190 km east of Cagayan, and moving west southwest at 19 kph. Landslides blocking roads were reported in Apayao province.Tropical Storm Risk (www.tropicalstormrisk.com) said Megi was a category 5 super typhoon, the highest rating, with winds of more than 250 kph (155 mph) and would retain that strength as it crossed north Luzon on Monday.Government forecasters said the typhoon, known locally as Juan, had winds of 225 kph near the center and gusts of 260 kph.The governor of northern Cagayan province told Reuters on Sunday the typhoon could damage or destroy up to 60 percent of the rice crop. The Cagayan valley produces about of a third of the country’s rice.

Last year, the country lost 1.3 million tonnes of paddy rice following three strong typhoons in September and October, prompting it to go to the market early to boost its rice stocks.Benito Ramos, head of the national disaster agency, said in a radio interview more than 1,100 people had been evacuated in Cagayan. Officials have warned of rough seas, and the risk of flash flooding, storm surges and landslides – Reuters

Japan PM worried over safety of Japanese in China