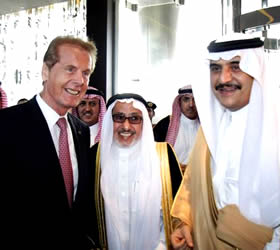 ALKHOBAR: Eastern Province got a sparkling new landmark Sunday when Gov. Prince Mohammad bin Fahd opened the five-star Sofitel Alkhobar Hotel overlooking the Arabian Gulf on the city’s corniche.Business is booming throughout the region, and the governor said the opening of this Alkhobar hotel is a positive indicator for the Saudi economy, providing a new springboard for the Kingdom’s growing tourist and hospitality industry.The governor was delighted with the opening and congratulated hotel owner Saad Al-Dajam for his contribution to the Eastern Province’s business development.“This is an impressive hotel,” Prince Mohammad told Arab News after the inauguration. “We need more such hotels and furnished apartments in this region because more and more people from other parts of Saudi Arabia are visiting the Eastern Province.”He urged businessmen to invest in hotels in the region. “By the grace of God and thanks to the generous support of our government, we are witnessing phenomenal growth, and now is the time to come up with many such projects,” he said. “It goes without saying the importance that the Eastern Province holds as the Kingdom’s economic, commercial and industrial center.”Prince Mohammad said Saudi Arabia is marching ahead with its development plans. According to him, one of the major reasons why the worldwide recession had no impact on Saudi Arabia was Saudi government’s prudent economic policies. “Our government worked on good investment plans in these last 20 years … the idea was to ensure that the money is spent on sound business projects and to a guarantee a good future for our Saudi people.”Al-Dajam, the owner of the hotel, thanked the prince for his encouragement. “This is a proud moment for us,” he said. “We believe in our economy, and we are sure this will turn out to be a good investment. We always wanted to open such a hotel here in the Eastern Province after having successfully run a similar hospitality project in Riyadh,” he said, referring to his Al-Waha Palace Hotel in the Saudi capital.

Al-Dajam said Sofitel will provide a big boost to tourism industry in the Eastern Province.General Manager Helmut Stadlmann, an Austrian national who has worked with the Sofitel group in Vienna and Munich for more than 20 years, said the new hotel meets European standards. “This is not less than any other Sofitel Hotel across the globe. It has that unique French touch because we are a French group.”The Sofitel Group operates more than 150 hotels worldwide with each one adapted to its surroundings. This comes after a decision in 2008 to remove 50 properties from the network so that a consistent level of quality would be maintained around the globe. In addition to operating in most major cities around the globe, the chain is expanding, most notably in the Middle East and Asia.

“Sofitel Alkhobar comprises 229 rooms, including 30 suites and one royal suite,” Stadlmann said. “The Club Sofitel, reserved for guests staying on executive floors, offers a personalized service and an exclusive environment. The hotel also has three restaurants and lounges, a covered pool with panoramic views and a relaxation center. With its eight fully equipped halls, including a majestic ballroom that can accommodate up to 500 guests, the Sofitel Alkhobar is the ideal location for business meetings and huge wedding parties,” he said.

The hotel is located on the seafront, a stone’s throw from the city center. It is a 45-minute drive from King Fahd International Airport in Dammam and about 50 minutes drive from Bahrain International Airport. “The 229 rooms and suites are overlooking the Arabic Gulf waves or the illuminated Alkhobar city center,” said Stadlmann.“We are expecting foreign business travelers and also leisure travelers from Riyadh who come to the Eastern Province to enjoy the weekend,” he added. The hotel is spread over an area of 31,000 square meters.Dammam-based AFM Consultants provided design engineering and project management services for the project. “In terms of facilities and architectural designing, this is the best five-star hotel not just in Saudi Arabia but the entire Gulf region,” said AFMC Project Manager Showkat Ali Mir – Arabnews