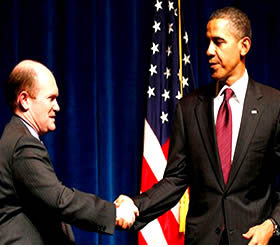 WASHINGTON: Democratic leaders, grasping to keep control of Congress, are turning their backs on some of Barack Obama’s staunchest supporters and propping up stronger candidates who have routinely defied the president on key issues such as health care and climate change.Raw politics — the drive to win the 218 seats needed to retain a House majority in the Nov. 2 election — is increasingly trumping policy and loyalty in these decisions. Democrats are shifting money and attention in the closing days of the campaign toward races they can win and pulling back from those seemingly lost. Democratic strategists acknowledge the tough decisions are based on harsh reality: If the party loses the House, all of its plans and Obama’s would face major Republican roadblocks, so right now it’s about scoring as many wins around the country as possible — whether that benefits friends or foes of core party principles.“They have to make very cold-blooded decisions,” said former Rep. Martin Frost, who headed the Democratic Congressional Campaign Committee in the 1990s.“The important thing is to hold onto as many seats as you can. It doesn’t have anything to do with how they voted — this is pure politics, and both parties play it exactly the same way,” Frost said.

Democrats are trying to blunt an expected Republican wave and minimize their losses at a time when voters are upset over the weak economy, high unemployment and politics-as-usual in Washington. Analysts give Republicans a good chance of gaining control of the House, but consider it less likely that the opposition party can win a Senate majority.“There is no doubt this is a difficult election. This is a tough political environment,” Obama told voters Friday in a joint campaign appearance with Vice President Joe Biden in Delaware, a rare bright spot for the governing party. Democratic candidate Chris Coons holds a solid lead in the polls over ultra-conservative tea party-backed Republican Christine O’Donnell in the race for the Senate seat once held by Biden.

Obama is campaigning coast to coast, raising money for candidates and looking to energize Democratic voters, whose enthusiasm has waned since the 2008 presidential election.Even in the most liberal states, Obama has a warning for Democrats: no candidate is guaranteed a victory in this volatile election season, Obama’s message: while the economy may still be struggling to rebound from the recession, Republicans want to return to the policies he says led to the economic crisis.Obama was heading to Boston on Saturday to headline a rally for Massachusetts Gov. Deval Patrick, his longtime friend and political ally. Republicans have tried to use Patrick’s close relationship with the president to unseat the governor, who is seeking a second term.

The battleground for control of the 435-seat House is focused on 75 or more competitive swing districts, most of them with endangered Democratic incumbents.The Democrats are shelling out $40 million in 59 congressional districts in the last three weeks of the campaign for TV advertising. Republicans, boosted by well-funded outside groups, are working to expand the political battleground by pouring money into 82 races next week alone – Arabnews

Cyber attack threat ‘could be next Pearl Harbor’

Cyber attack threat 'could be next Pearl Harbor'