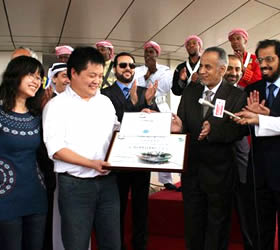 JEDDAH: More than four million people have visited the Saudi pavilion at the Shanghai World Expo 2010,  Saudi Press Agency reported on Sunday.The majority of visitors were Chinese. “I have heard a lot about the beautiful Saudi pavilion at the expo and I came from the Kan-sun province to visit it,” said Lai Shia-ron, who won a prize for becoming the 4 millionth visitor. He said he was happy to visit the pavilion after waiting about three hours in the queue. “I was quite sure that the pavilion is worth waiting for. I never expected that I would get a prize. It was a pleasant surprise.”Lai, who is a Muslim, won two air tickets from Al-Tayyar Travel to visit the Kingdom. “The tickets will allow me to visit the holy places in the Kingdom with my mother to perform Haj. It was my long dream.”The organizers believed that one more million people would visit the pavilion before the end of the exhibition on Oct. 31. Last month, Ma-john, a visitor from a nearby town, won the prize for being the 3 millionth visitor. He also received two air tickets.More than 30,000 people visit Saudi Arabia’s pavilion at Shanghai World Expo 2010 every day to learn about Islam, its holy places in Makkah and Madinah and the Kingdom’s remarkable progress in various sectors – Arabnews