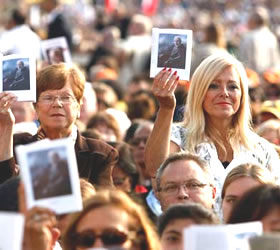 Brother André Bessette, the humble Canadian lay brother credited with healing thousands of sick, has been recognized as a saint during ceremonies at the Vatican.The Montrealer and five others — including a nun is who now Australia’s first saint — were canonized by Pope Benedict XVI at St. Peter’s Square on Sunday.In Montreal, the faithful crowded around a big-screen television at St. Joseph’s Oratory to watch the ceremonies. All night, the church was packed with people in prayer, and the crowd swelled as events were broadcast live from Rome, starting at 4 a.m. ET.Men and women spilled out into the hallway, decorated with hundreds of votive candles and the cast-off crutches of the faithful who believed they were healed by André, who died more than 70 years ago and is buried in the Church of the Crypt at the Oratory.Some said they appreciated the fact that he was a simple man. They were impressed with his humility, that he said he wasn’t a healer, but that it was St. Joseph who was really behind any miraculous recoveries.

Pope Benedict noted that Brother André was poorly educated but understood what was essential to his faith.”Doorman at the Notre Dame College in Montreal, he showed boundless charity and did everything possible to soothe the despair of those who confided in him,” Benedict said.Brother André founded St. Joseph’s Oratory in 1904 — although it was a modest chapel and far from the grand landmark that looms over Montreal today on the northern slope of Mount Royal.

Healer came from humble beginnings
he was born Alfred Bessette on Aug. 9, 1845, in St-Gregoire-d’Iberville, Que. — a small town southeast of Montreal — and was orphaned when he was 12 years old.Before joining the Congregation of Holy Cross in 1870, he worked in the textile mills of the northeastern United States.Once he took his vows, he gave comfort to people who came to him at College Notre-Dame for solace, and many credited him with curing their illnesses.He was declared “venerable” by Pope Paul VI in 1978 and beatified — declared “blessed” — by Pope John Paul II in 1982 after a case of healing in 1958 was recognized officially by the Vatican as a miracle.
Two miracles attributed to Brother André
The canonization campaign for the man many faithful call the “Miracle Man of Montreal” began soon after his death in 1937 at age 91.Over the years, millions of people have signed petitions asking for his sainthood.Before such recognition, the Vatican must accept that someone is responsible posthumously for two miracles. The first miracle attributed to the Canadian came to the Vatican’s attention in 1958, when New York businessman Joseph Audino said he had recovered from terminal cancer after asking for André’s spiritual guidance.The second case involved a young Quebec boy who in 1999 recovered from severe head injuries suffered when he was riding his bike and was struck by a car. Relatives said they prayed to Brother André.Benedict announced Brother André’s canonization in February after recognizing the second miracle attributed to him.The lay brother is the first saint born in modern-day Canada.The road to Catholic sainthoodOne miracle at a timeThe Canadian Conference of Catholic Bishops says Canada now has 11 saints.Marguerite d’Youville was the first saint born on Canadian territory, in 1701.Canada’s other saints include Marguerite Bourgeoys, who was born in France in 1620 and is considered the co-founder of Montreal, and eight French-born Jesuit martyrs who were killed during wars in the 1640s.The other new saints canonized Sunday include Mother Mary MacKillop, the founder of the Congregation of the Sisters of St. Joseph in Australia’s outback, Stanislaw Soltys, a 15th-century Polish priest, Italian nuns Giulia Salzano and Battista Varano and Spanish nun Candida Maria de Jesus Cipitria y Barriola.The 19th-century Australian nun who was canonized had been briefly excommunicated in part because her religious order exposed a pedophile priest –  Cbc