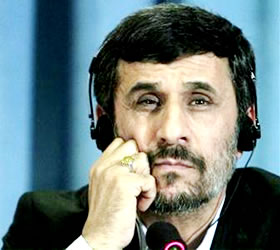 Iran’s president is welcoming a new round of talks with world powers on Tehran’s nuclear program.President Mahmoud Ahmadinejad spoke Sunday in the northwestern city of Ardebil.  He said Western nations had no choice but to talk to Iran, but the president also warned that his government would not give up any of Iran’s international rights.The comments are Mr. Ahmadinejad’s first on talks that could take place in Vienna in mid-November.European Union foreign policy chief Catherine Ashton proposed the meeting last week, offering to speak on behalf of the five permanent members of the United Nations Security Council and Germany.  The group — also known as the P5+1 — had recently expressed a desire to re-establish dialogue with Tehran.Iran is under four sets of U.N. sanctions for its refusal to stop enriching uranium.  The EU and several countries have also imposed their own penalties on Iran.

The United States and other world powers suspect that Iran wants to create nuclear weapons, a charge Teheran denies.The mid-November meeting would focus on a nuclear swap proposal introduced last year. Under the plan, Iran would swap low-enriched uranium for uranium fuel rods that would be used in a medical research reactor.On Friday, Iranian Foreign Minister Manouchehr Mottaki welcomed the offer, calling it “good news – Voanews