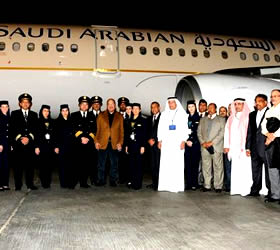 JEDDAH: Saudi Arabian Airlines will receive 38 new Airbus planes by the end of this year, said Khaled Al-Molhem, its director general, on Saturday. “The new planes will strengthen the airline’s capability to meet growing passenger traffic requirements,” he said.“It’s a big achievement for Saudi Arabian Airlines because it is for the first time such a large number of new aircraft join the fleet of an airline in a single year,” he told reporters after arriving on board Saudia’s new Airbus 321 aircraft at King Abdulaziz International Airport.He said Saudia would continue its investment toward modernizing its infrastructure. “We’ll apply an integrated automatic system linking all the organization’s activities. We’ll also develop automatic service systems at airports,” he said.

Asked about new aircraft to be received in 2011, Al-Molhem said: “We expect to have 50 new aircraft from Airbus next year. We’ll start receiving new Boeing 777s by 2013,” he said. The airline has so far received 26 A320s, five A330s and one A321 bringing the total to 32.Al-Molhem said Saudi Airlines ordered 15 A321s with a capacity to hold 165 passengers including 20 seats for business class. “Usually, these types of aircraft can accommodate 220 passengers but we reduced the number of seats for the comfort of passengers.

“We are moving in the right direction in accordance with our strategic plan, which includes acquiring advanced aircraft, improving service standards and application of modern technology.”The director general said the new planes would help meet the requirements of a growing number of passengers, including Haj and Umrah pilgrims. “We have given top priority to Haj because of our responsibility toward the guests of God,” he added.

“We have already started implementing our Haj plan on Oct. 9. We’ll carry about one million pilgrims on 2,321 incoming and outgoing flights covering 83 cities around the world. Our plan aims at ensuing 100 percent safety of pilgrims,” he said.Al-Molhem said the new A321s would be used to operate between major Saudi cities and Middle Eastern cities. “We’ll put into service more new aircraft this year and the coming years,” he said. The new aircraft will strengthen Saudia’s position in facing competition by operating new flights to existing and new destinations and providing a required numbers of seats.“Saudia has a strategic plan to restructure domestic flights, especially to sectors with heavy passenger traffic. There will be substantial increase in flights between certain regions,” he said – Arabnews