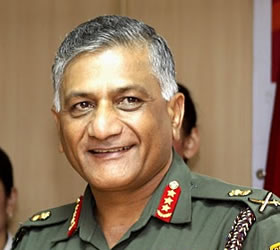 NEW DELHI: Calling Pakistan and China “irritants” for India, army chief General VK Singh  on Friday said the terror infrastructure across the western border and Beijing’s rising military prowess were a worry for the country.We have two irritants. One, mainly in terms of how the situation is, in Pakistan where there is a problem of governance, where there is certain amount of support that is being given to some terrorists and where the internal situation is not very good,” Gen. Singh said, addressing a seminar on ‘Indian Army: Emerging Roles and Tasks’ here.He said the situation in Pakistan “can have a fallout in terms of how the things there impact India”.The army chief said that India has “something to worry” about till the terrorist infrastructure “remains intact on the other side of the border”.”Similarly”, he said, “we have a rising China, both economically and militarily. Although we have CBMs in place, although we have a very stable border, yet we have a border dispute.”He said that a conventional war with China or Pakistan was “highly uncertain” but “skirmishes can occur”.”We should have a great amount of conventional capability to function in a conventional conflagration and yet be prepared to function in a nuclear backdrop,” he said – Timesofindia