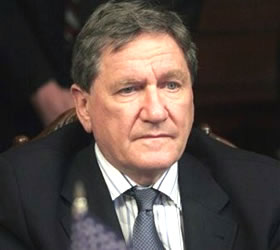 ASHINGTON: The Obama Administration believes its special representative for Afghanistan and Pakistan Richard Holbrooke is doing a fine joband will continue to lead U.S. civilian efforts in the region, according to a State Department official.“We are enormously pleased with the effort that Ambassador Holbrooke is leading and he will continue as he is at the present time,” Assistant Secretary of State Philip J Crowley said.Crowley was answering a question about the performance of Richard Holbrooke, who  was assigned as special envoy for the region about 20 months ago.  Currently in the European capital Brussels for a Friends of Democratic Pakistan meeting, Holbrooke has been “leading the day-to-day execution of the President’s strategy  on the civilian side of the equation,” the spokesman told reporters at the daily briefing.

The diplomat has assembled a team that includes representation from across the American Government and, in fact, includes significant participation from other international partners in this effort, the spokesman noted.“He Holbrooke is in Europe consulting with our international partners. He will be with the Secretary of State Hillary Clinton in Brussels. And we will be continuing to  work as hard as we can to see this process advance,” Crowely said,referring to President  Obama’s policy toward Afghanistan and Pakistan.  Questioned if Holbrooke’s appointment is open-ended, the spokesman said it is “not term-limited – App