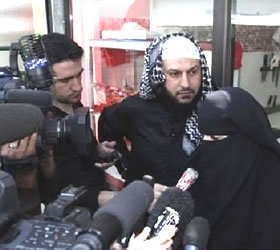 A French woman accused of ripping off the full face veil of an Emirati tourist and biting and scratching her when she put it back on faced prosecution demands for a two-month suspended prison sentence on Thursday.”Co-habiting implies that we have to tolerate others whatever they are wearing,” prosecutor Anne Fontette told a Paris court.The case comes just days after the highest constitutional authority approved a bill outlawing the garment with offenders potentially fined 150 euros ($189) or required to take part in a citizenship class. The bill is due to take effect after a six-month period aimed at informing veiled women about the law.The retired English teacher, known only as Marlene, had told police she asked the woman from the United Arab Emirates in English to remove the veil. When the woman refused, she ripped it off. When the woman put it back on again, she punched, scratched and bit her, according to the police report.”I knew I was going to crack one day,” 63-year-old Marlene said, according to police. “This burqa story was beginning to annoy me.”

The incident, for which she also faces a 750 euro ($1,000) fine, occurred in a luxury Paris boutique last February.Marlene, who did not appear in court and had no legal representation, has defended her position in the media. Speaking to Le Parisien newspaper, she said it was unacceptable women wore the veil in what she called the birthplace of human rights.”I taught languages in Morocco and Saudi Arabia,” she told the newspaper. “I have seen how in those countries women are treated alking three meters behind their husbands.”She denied any acts of violence in the newspaper.France’s five million-strong Muslim community is Western Europe’s largest, but fewer than 2,000 women are believed to wear a full face veil. Many Muslim leaders have said they support neither the veil nor the law banning it.The verdict is due on November 4 – Reuters