Plane crashed near Kabul perished all eight on board 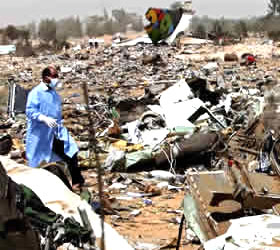 KABUL: A cargo plane operating on behalf of a US-based company crashed into mountains and burst into flames near the Afghan capital yesterday, killing all eight crew on board, officials said.The plane had taken off from Bagram, one of the largest US-run military bases in Afghanistan, 60 kilometres north of Kabul.Local aviation officials said the plane was carrying goods on behalf of the US-led NATO force in Afghanistan, the International Security Assistance Force (ISAF), but an ISAF spokesman said only that he was checking those reports.Officials gave no immediate word on the cause of the crash, which happened after dark.

“A C-130 cargo plane operated by National Air Cargo was on its way from Bagram to Kabul,” Mohammad Yaqoob Rasouli, the director of Kabul International Airport said.“It disappeared from radar screens at 19:25 (9pm Malaysian time) six miles on the radar screen northeast of Kabul airport,” he said.“The tower saw a fire in the same location and we also got telephone confirmation from the area of a crash.”“The plane had eight crew members: six Filipinos, one Indian and one Kenyan. Search operations have already begun.”

A spokesman for Afghanistan’s ministry of transport and civil aviation said all crew on board perished.A police official in the area said a fire was still burning at the crash site nearly two hours after the plane came down.US-headquartered National Air Cargo said that the crashed aircraft belonged to Trans Afrique, a company based in Ghana

Gilani vows to continue struggle till to logical end