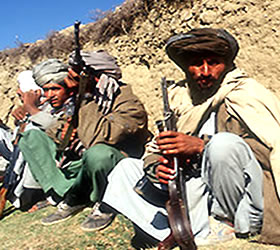 A senior NATO official says the coalition in Afghanistan is facilitating contacts between senior Taliban leaders and top Afghan government officials.The official says the alliance has helped secure passage of Taliban commanders to Kabul for high-level contacts with the government.  The official said it would be very difficult for Taliban leaders to travel safely to Kabul without NATO’s consent.The NATO official,  who spoke in Brussels on the condition of anonymity, said the contacts mark a preliminary step toward reconciliation talks.Meanwhile, the Taliban on Wednesday denied reports that its leaders were talking to the Afghan government about ending the insurgency.

Earlier this week, President Hamid Karzai said his government had been holding unofficial talks with the Taliban.U.S. special representative to Afghanistan and Pakistan, Richard Holbrooke, said the United States is not involved in the talks, but supports reconciliation efforts on condition that insurgents respect the Afghan constitution, renounce al-Qaida and lay down their weapons.Six NATO service members were killed in Afghanistan Wednesday, in what already has been the deadliest year for coalition forces since the war began nine years ago.The alliance says five troops were killed by roadside bombings in the south, and the sixth was killed by insurgents in eastern Afghanistan.

NATO commanders have warned of an increase in violence as Afghan and coalition forces go on the offensive against insurgents.  More than 30 NATO service members have been killed this month.In Brussels Wednesday, the top U.S. and NATO commander in Afghanistan, General David Petraeus, spoke with NATO ministers about a plan to transfer security responsibilities to Afghan forces starting next year.After the briefing, NATO’s civilian representative in Afghanistan, Mark Sedwill, told reporters that while the plan calls for completing the transition by 2014, it ultimately will depend on conditions on the ground.  Sedwill added that some allied troops likely will still remain in Afghanistan beyond 2014.

Separately, the U.N. Security Council renewed the mandate for NATO forces in Afghanistan for one more year, until October 13, 2011.  The council also expressed concern about Taliban and al-Qaida violence and the increased number of civilian casualties.In other violence Wednesday, Afghan and coalition forces say they killed a Haqqani network leader, Ansari Khan, in Khost province -Voanews

Chile Completes Rescue of All 33 Miners