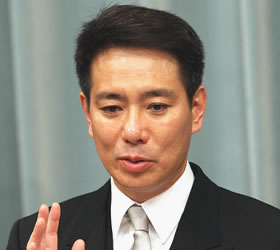 Internet giant Google is being dragged into a dispute between Japan and China over a chain of islands in the East China Sea.Japanese Foreign Minister Seiji Maehara told a parliamentary committee on Thursday his office will approach Google to ask that it remove the Chinese name for the island chain from its map service.He also endorsed the action of an opposition lawmaker who visited Google offices in Tokyo Wednesday to make the same demand.Japan calls the island chain Senkaku while China calls it Diaoyu. Google maps currently show both names.Relations between China and Japan were seriously damaged after Japanese patrol boats arrested a Chinese fishing boat captain near the islands early last month. The islands are administered by Japan.Google would risk angering China if it adopted the Japanese request.The company recently had its license to operate in China renewed, but only after it dropped its practice of automatically redirecting Chinese users to a search engine based in Hong Kong in order to circumvent Chinese censors – Voanews