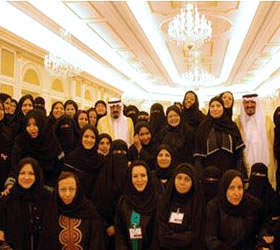 JEDDAH: A Saudi woman diplomat addressed the Human Rights Committee at the United Nations in New York on Tuesday and emphasized the Saudi government’s efforts for the empowerment of women in the country.Aseel Al-Shehail, second secretary at the Saudi mission in the United Nations, said the number of registered businesswomen reached 40,000 in 2009, 70 percent more than in 2007.She also spoke about the growing participation of Saudi women in nation-building activities. “All government departments that serve women have been instructed to open special sections for women,” the Saudi Press Agency quoted Al-Shehail as telling the UN panel.The Kingdom has appointed a number of women as diplomats at embassies and advisers at the consultative Shoura Council. “They also hold leading positions in commercial and industrial firms,” she said.Dr. Mouda Al-Khalaf, the first Saudi woman to hold the position of director of cultural and social affairs at the Saudi Embassy in Washington, highlighted Saudi women’s capabilities in holding important positions.“The absence of women in positions like consuls or charge d’affaires is a waste of their capabilities and experience,” Al-Khalaf said, citing achievements by Saudi women in scientific and educational fields.Speaking to Al-Riyadh Arabic daily, Al-Khalaf said she was proud of her new position, saying it gives her an opportunity to defend Saudi women and remove stereotypes about their role in the country.

Being the director of cultural and social affairs, Al-Khalaf interacts with American individuals and institutions and takes part in seminars and conferences. She also supervises some 130 Saudi student clubs at various American universities.Dr. Samar Al-Saggaf is the director of the medical and health science program at the Saudi Embassy in Washington. She looks after the affairs of Saudi medical students in the United States. She also interacts with American universities to obtain admission for Saudi students.

Al-Saggaf believes that Saudi women are capable to take leading positions in embassies.“We should think about qualifications not genders while making appointments,” she pointed out.
Sameera Al-Shahrani is a media researcher at the Saudi Embassy in Cairo. She thanked Custodian of the Two Holy Mosques King Abdullah for his efforts to empower women and protect their rights.“By the grace of God, working areas for women are expanding day by day.”Saudi Ambassador in Greece Saleh Al-Ghamdi said there are two women employees in his embassy, one working as an accountant and the other as a translator – Arabnews