Chile Completes Rescue of All 33 Miners 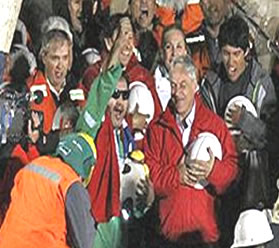 Chilean rescuers ended a marathon operation Tuesday and freed all 33 miners trapped underground for more than two months.  All of the rescued miners were sent for medical treatment and several of them are expected to undergo surgery in the coming days.Chilean officials say the rescue operation at the San Jose mine in northern Chile advanced more quickly than expected. Initially, officials said it might take 48 hours to pull the miners to the surface through a 622-meter rescue shaft.Rescue crews honed the process throughout the day, enabling them to pull each miner to the surface in about 15 minutes.Rescue crews and officials cheer and clap as each miner arrives at the surface, where family members are waiting for him.  Medical teams rush each man  to a hospital in nearby Copiapó for a thorough examination.Chile’s President Sebastián Piñera is at the site to greet each rescued miner.After Victor Zamora surfaced, Mr. Piñera told him that he was never alone, saying that the government fulfilled its promise to bring the men back alive.The rescue ends a two-month-long ordeal for the men, who were trapped by a cave-in at the gold and copper mine on August 5.  The men were cut off from the surface for 17 days, until a drilling crew located them.Chilean Mining Minister Laurence Golborne offered thanks to scores of experts and others who have helped carry out the rescue operation.  But he cautioned that the job was not over yet.

Golborne said weeks of work are finally paying off, but officials will not be satisfied until the rescue is completed.Health Minister Jaime Mañalich says many of the miners appear to be in better health than expected.  He says each miner will undergo a series of tests, including a lung x-ray and heart monitoring, and that some might receive psychiatric treatment, if needed.A few miners are expected to receive dental surgery in the coming days to treat abscesses and other conditions.  Mañalich says the most serious case was a miner with pneumonia.

He says the miner will likely remain in intensive care for several days to receive oxygen and other treatments.More than 1,000 journalists are covering the rescue operation at the remote San Jose mine in the Atacama desert.  During the past two months, relatives of the miners and rescue crews have gathered outside the mine, forming a community they call Camp Hope.

Millions of people around the world are watching the rescue operation unfold on television.  In Washington, U.S. President Barack Obama says he watched the first miner being freed, adding that it was a tribute to the hard work of the rescue workers and the Chilean people.  He thanked people from around the world who contributed to the operation, including a U.S.-based drilling team and experts from the U.S. space agency, NASA – Voanews