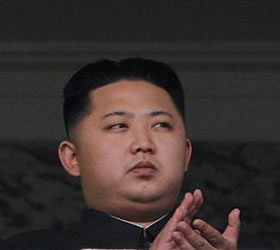 Spectacular public shows in recent days in Pyongyang have left little doubt in North Korea – or other countries – that a succession of power is under way there.  Kim Jong Un, believed to be 27, has made prominent appearances alongside his father, leader Kim Jong Il. The elder Kim, nearing 70, has had serious health problems in recent years.A parade marks the 65th anniversary of the founding of North Korea’s only political party. It makes clear the relationship between the party and the army.The reclusive government allowed in foreign cameras to record Sunday’s parade of soldiers and missiles, which official media called a demonstration of North Korea’s “intention to destroy the enemy.”Joining leader Kim Jong Il on the reviewing stand was the country’s youngest general – Voanews