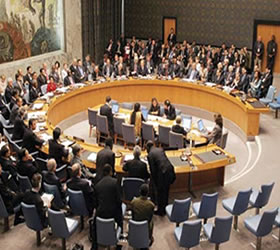 UNITED NATIONS: India, South Africa, Columbia, Germany and Portugal won non-permanent membership of the UN Security Council when the General Assembly voted to fill five seats that will become vacant at the end of the year.The outgoing members are: Turkey, Austria, Japan, Mexico and Uganda. The new members will take over on January 1, 2011, and will serve for two years.  India polled 187 votes—the highest tally—South Africa 182, and Colombia 186.They were unchallenged in the contest. Germany had been part of a three-country battle for two seats from a group of countries from Western Europe along with Australia, New Zealand and Canada.Germany, which had Foreign Minister Guido Westerwelle in New York to lobby support, secured 128 votes in the first round of voting, one more than the two thirds majority required in a secret ballot.Portugal had 122 votes and Canada 114 in the first ballot. But then Canada withdrew, allowing Portugal with 150 votes to march into the 15-member council, the United Nations power centre.
Five of the 15 nations on the Security Council are elected to two-year terms each year. Britain, China, France, Russia and the United States are permanent members of the council. “We are truly delighted… We were an endorsed candidate but the endorsement came after a long campaign … We are humbled by the number 187,” Indian ambassador Hardeep Singh Puri told reporters after the vote that brings India into the Security Council after 19 years.
“This reinforces are commitment to work in the Council along with others to issues we have always given priority,” he said. Although not a candidate in the contest, one vote was cast for Pakistan. Asked whether Pakistan had voted for itself, Ambassador Puri said, “Well I know that Pakistan voted for India so that particular vote was not cast by Pakistan … it was cast by someone else … I don’t want to comment on the state of mind of the person who put it in – App