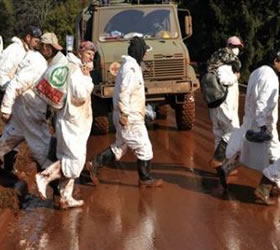 The Hungarian government has taken control of MAL Ltd., the aluminum company whose chemical waste facility ruptured last week in western Hungary, causing a flood of toxic waste that devastated two towns, killed eight people and wiped out all wildlife in the Marcal river.National disaster chief Gyorgy Bakondi on Tuesday was named the government’s point man in charge of the plant.Hungarian police have arrested the company’s director, Zoltan Bakonyi. Prime Minister Viktor Orban told parliament the October 4 ecological disaster was the result of human negligence.European Union experts sent to Hungary to examine the aftermath of the toxic spill are not sure if the affected areas can be completely decontaminated.Laurent de Pierrefeu, an EU spokesman said Tuesday experts were still analyzing the information available. He said they would inform the government once their verdict was in on the future of the area around Devecser.Bokanyi denied to VOA News that his company was guilty of negligence. He insisted it was not a “human mistake”.A partial collapse of the reservoir’s wall released about 600,000 cubic meters of red sludge into several communities, including Devecser, where the body of an eighth victim was found Monday. More than 100 people were injured, including 45 who remain hospitalized.

Authorities said workers were racing to finish building a new dam around the broken reservoir by Tuesday to prevent further spills of its remaining 2.5 million cubic meters of chemical waste. The reservoir’s northern wall is cracked and expected to crumble.The sludge also polluted tributaries of the Danube River.The red sludge is a byproduct of bauxite – a material used in manufacturing aluminum – Voanews