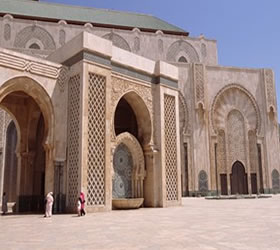 OSNABRUECK: Ahmed Sami spoke only Arabic when he moved from Morocco  to Germany eight years ago to work as an imam. During his Friday prayer services at a mosque in western Germany, he soon noticed that many of the listeners could not understand him.“The children and teenagers don’t speak a lot of Arabic anymore,” the 31-year-old imam said. “German is their native language.”Now Sami’s part of a pilot program at the University of Osnabrueck that started this week to train imams — not only in the German language but also to steer them to preach about Islam in a way consistent with Germany’s democratic values and religious tolerance.It comes at a time of growing concern about some young German Muslims becoming radicalized in extremist mosques and turning to terrorism. This month’s terror alert in Europe was sparked by information provided by a German radical of Afghan descent who had been captured by U.S. forces in Afghanistan.“We need imams who are socialized and at home in Germany,” said Rauf Ceylan, a professor for Islamic religious education and one of the founders of the new program in Osnabrueck, in northwestern Germany. “They influence the religious orientation of Muslims in Germany, they have a big impact on whether young Muslims will practice a tolerant, conservative or extremist version of Islam.”Other European countries have been taking new measures as well. In France, which has a Muslim population of at least five million, the Catholic University of Paris began courses to train French imams in 2008; several imams have been expelled in recent years for what was deemed dangerous teaching.

Experts say the new German academic initiative is much needed. So far, over 90 percent of the more than 2,000 imams in Germany barely speak any German. Most come from Turkey and only stay here for a couple of years before going back home. Due to the language barrier, these foreign-sent imams can’t interact with younger community members and they are also not aware of the specific problems the 4.3 million Muslims in Germany deal with on an everyday basis.
Imams hold key positions within the immigrant communities. Just like pastors or rabbis they deliver religious guidance, but they are also the first contact point for parents’ worries when the children don’t perform well in school, they mediate in marital disputes or get involved in cultural clashes with the Christian majority in Germany.

Later this week, the federal government is expected to announce the establishment of up to three new university departments for Islamic studies in Germany that will include several new professorships. The goal is to educate a new generation of imams and school teachers for Islamic religious instructions who believe and teach that western values and Islam are compatible.“We need mosques that are transparent, in order to create an atmosphere of trust,” among Germans and Muslim immigrants, the integration minister of Lower-Saxony, Aygul Ozkan, said at the opening ceremony in Osnabrueck earlier this week. Ozkan, a daughter of Turkish immigrants herself, said in order to create this transparency, it was essential that more imams learn the language and also preach in German.

For Sami, learning to preach in German is one of the main attractions of the state- and federally-funded Osnabrueck program. While he has already started translating parts of his Arabic sermons into German, he still feels the need to improve his overall language skills.Sami, one of thirty students enrolled in the one-year, tuition-free program, said he also looked forward to classes about Germany’s political system.“It’s very important for us to understand the pluralistic, German society,” he said. “It’s very different from the political system in Morocco.”The curriculum includes a visit to the German parliament in Berlin, a meeting with a rabbi at a synagogue in Osnabrueck and several classes by Christian theologians.

Avni Altiner, the head of the Shura in Lower Saxony, a Muslim association made up of 80 communities that supports the new program, also stressed the need for more German-speaking preachers at mosques in Germany.“We don’t want foreign, fundamentalist preachers in this country, we want German imams,” Altiner said.The Osnabrueck imam training will cost the public euro300,000 ($418,000) to fund through 2013. Starting in 2012, the university is also going to offer a three-year bachelor degree program for imams. The university has long made religious instructions an academic focus and also offers Protestant and Catholic educational courses.Demand for better education of imams in Germany seems high. When Osnabrueck university earlier this year first announced its plans to offer the imam training, more than 90 people applied.

“Initially, we only wanted to admit 15 students,” said Bulent Ucar, another professor for Islamic studies in Osnabrueck. “But when we saw how huge the interest was, we decided to double the number of students.”While all of the students currently enrolled live and work in Germany already, their background is diverse. There are Arabs, Turks and Bosnians, Sunnis and Shiites. Some moved here only recently while others were born and raised in the country. Among the 30 students there are also four women who are working as counselors or youth workers in mosques across Germany.

Redzo Sekic, a Bosnian Muslim, works as an imam at a mosque in Bochum that is mostly frequented by immigrants from the former Yugoslavia.The 30-year-old, who moved here five years ago, hopes the classes will boost his German skills and enable him to better respond to the young generations’ needs.“There are sometimes problems with drugs or alcohol and the parents don’t know how to tackle these issues,” Sekic said. “I hope that after I have finished these classes, it will be easier for me to understand them — their language as well as their problems.”Mustafa Adanur, a 39-year-old imam from Duisburg, doesn’t have any language problems, because he was born and raised in Germany. He is mainly concerned about the many problems among Germans and Turkish immigrants and hopes the classes will offer ideas on how to deal with issues of integration and discrimination – Timesofindia