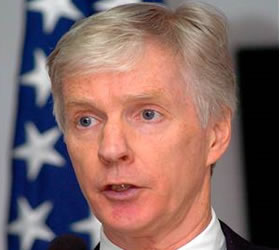 NEW YORK: A former American ambassador to Pakistan has urged the United States not to carry out cross-border military actions on Pakistani territory, and instead support the Pakistan government in meeting its challenges.  “They (cross-border attacks) are clearly counterproductive, and not just because we hit the wrong target,” Ryan Crocker, who served in Pakistan from 2004-2007, wrote in an article “Pakistan is not America’s enemy” published in The Wall Street Journal Tuesday.“If NATO can carry out military actions in Pakistan from the west, Pakistanis wonder, what stops India from doing the same from the east,” he posed the question, suggesting that Washington must appreciate Pakistan’s problems.Crocker, who is now dean of Texas A&M’s George Bush School of Government and Public Service, said as ambassador he had strongly resisted cross-border military action. “There are other options, including drone strikes, which the U.S. is now coordinating more closely with Pakistanis.”
“Pakistan’s historical narrative focuses on  how the U.S. worked with Pakistanis and Afghans to drive the Soviets  from Afghanistan in the 1980s: We succeeded and then we left,”  Crocker said, underscoring the need for long-term US commitment on  both sides of the Durand Line. “A sustained U.S.-Pakistani partnership  after the Soviet withdrawal from Afghanistan could have produced a very different history than the one we wrestle with today.”
He proposed that the US must be private in its criticism and public in its support while dealing with Pakistan and Afghanistan. “Private talks should deepen regarding challenges like the insurgent Haqqani network in North Waziristan, and we need to listen at least as much as we lecture,” the author said. Crocker also proposed that talks between the U.S. or Afghanistan and the Taliban must be transparent to the Pakistanis.
“A nightmare for Islamabad is the prospect that the Americans and Afghans come to some accommodation with Taliban elements that would leave them hostile to Pakistan,” he said. “If Pakistan is not part of the process, we will be working at cross-purposes and only the Taliban will benefit… “Going forward, the timing and nature of talks with the Taliban should be set by Afghans, Pakistanis and Americans working together – App