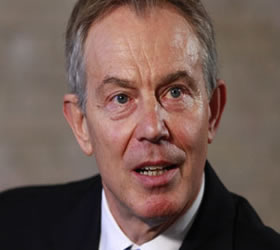 A debate in Toronto in November will pit former British prime minister Tony Blair against fervently atheist writer Christopher Hitchens in a discussion of religion.The two men will meet at Toronto’s Roy Thomson Hall in a Munk Debate on the question of whether “religion is a force for good in the world.”The Munk Debates are a series created through the Aurea Foundation, a Canadian charity established by businessman and philanthropist Peter Munk.Blair, a Roman Catholic convert, has spoken openly about the role of faith in his life since leaving office and has formed the Tony Blair Faith Foundation, which promotes “respect and understanding” among the world’s major religions.He will argue an understanding of faith is necessary in a world of globalization and rapid social change.”Religious faith has a major part to play in shaping the values which guide the modern world, and can and should be a force for progress,” he said in support of his position.Blair recently released his memoir, A Journey.Hitchens is author of God Is Not Great: How Religion Poisons Everything, which suggests that organized religion is “violent, irrational, intolerant, allied to racism, tribalism, and bigotry, invested in ignorance and hostile to free inquiry, contemptuous of women and coercive toward children.”

The British-American author has restated his belief in atheism since being diagnosed with esophageal cancer earlier in 2010, arguing that reason is a sounder basis for approaching the world.”If religious instruction were not allowed until the child had attained the age of reason, we would be living in a quite different world,” he said in a quote on the Munk Debates website – Cbc