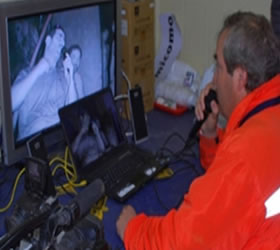 Six of the 33 miners trapped in a Chilean mine for more than two months have been hauled safely to the surface, where they were greeted by cheers and embraces from family, rescue workers and the country’s president.Jubilant cheers rang out shortly after 11 p.m. ET, when Florencio Avalos became the first miner to be rescued.By 5 a.m. ET, six miners had been pulled from the gold and copper mine near Copiapo, Chile.Avalos, 31, was greeted by his wife, two sons and father. His son, Bairon, 7, sobbed. Avalos hugged his rescuers and Chilean President Sebastian Pinera before being escorted into a medical triage centre set up on site.
Avalos was raised more than 600 metres through a rescue shaft while strapped inside a 190-by-54-centimetre metal capsule. His journey began at 10:55 p.m. ET and took just 16 minutes.The miners — who were trapped underground on Aug. 5 — are being hoisted to the surface one at a time through the shaft, which took weeks to drill.Before his rescue, crews ran tests by lowering an empty capsule down the shaft and raising it before sending it back down with a rescue worker inside to help prepare the miners for their trip to the surface.About 20 minutes after Avalos emerged, a second rescue worker was strapped into the capsule and it was lowered back into the shaft.

It returned to the surface with a second miner, Mario Sepulveda Espina, at about 12:10 a.m. ET. A third miner, Juan Illanes, followed about an hour later and a fourth, Carlos Mamani, came up shortly after 2 a.m.Jimmy Sanchez, 19, came to the surface about an hour later. Osman Araya, 30, was the sixth miner to emerge from the mine, the BBC reported Wednesday.Mamani — a Bolivian and the only non-Chilean to be trapped — was greeted by his wife Veronica, who hugged and kissed him so hard she knocked off the white hard hat she was wearing.The capsule, dubbed Phoenix 1, was taking a little more than 15 minutes to make each one-way trip. The winch that raises the capsule was expected to move at a speed of 0.7 metres per second, but the capsule can be pulled as fast as three metres per second if needed. Two additional capsules were built to serve as backup if necessary.

Avalos, described by friends as shy, had been the group’s second-in-command before the collapse and often acted as a cameraman after cameras were sent down, taking pictures of the other miners — a role that frustrated relatives who saw little of him in the videos.
Psychologists, Chile’s health minister and doctors at the site warned it could be a perilous journey for the miners.Doctors said the miners could suffer nausea and heart palpitations and were concerned about the risk of blood clotting and heart attacks. Aspirin had been sent down to the men earlier Tuesday to thin their blood.
Miners monitored during ascent.The miners are closely monitored from the moment they go in the capsule. They had been given a high-calorie liquid diet donated by NASA, designed to keep them from vomiting as the capsule rotates.
A video camera in the capsule is used to monitor for panic attacks. The miner uses an oxygen mask and has two-way voice communication.

They also wear sweaters because of the shift in climate from about 30 C underground to near freezing on the surface after nightfall. They are also wearing sunglasses.After medical checks and visits with family members selected by the miners, the men will be flown to hospital in Copiapo, a 10-minute ride away. Two floors were prepared where the miners will receive physical and psychological exams and be kept under observation in a ward as dark as a movie theatre.The last miner who will leave the mine has already been determined — shift foreman Luis Urzua, whose leadership was credited for helping the men endure 17 days with no outside contact after the collapse. The men made 48 hours worth of rations last before rescuers reached them with a narrow borehole to send down more food – Cbc