Egypt and Pakistan to step up bilateral cooperation 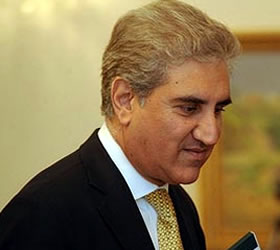 UNITED NATIONS, Sept. 29 (APP): Foreign Minister Shah Mahmood Qureshi and his Egyptian counterpart Ahmed Aboul Gheit agreed to step up bilateral cooperation in agriculture, alternate energy, cotton research and higher education during a meeting on Tuesday on the sidelines of the UN General Assembly. Pakistan and Egypt will encourage private-sector cooperation, with a view to enhancing complementarities of respective economies, a press release by the Pakistan Mission to the UN said.

Possibilities to increase enrollment of Pakistani students in Egyptian institutes of higher learning, particularly Al-Azhar University were also discussed. Foreign Minister Gheit expressed sympathies on the tragic loss of life and extensive devastation caused by floods in Pakistan. He confirmed his participation in the forthcoming meeting of the Friends of Democratic Pakistan (FoDP) in Brussels, according to the press release.  He also briefed the Foreign Minister on the ongoing negotiations to resolve the Palestine issue.
Qureshi thanked the government and people of Egypt for their support and assistance to the flood victims. He expressed interest in benefiting from innovative and modern irrigation-techniques employed in Egypt. The two Foreign Ministers also reviewed existing levels of cooperation between the two countries in the United Nations and other International fora – App

Pakistan presents its culture heritage treasure at a cultural festival