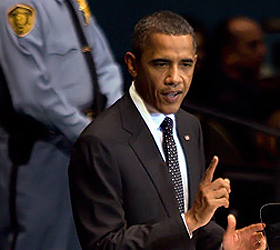 A meeting between the British Foreign Secretary and his Iranian counterpart has been described by Sky sources as “not a meeting of minds”. William Hague spoke to Manouchehr Mottaki at the United Nations in New York, where world leaders have gathered for the annual General Assembly. The UN is putting pressure on Tehran to abandon its nuclear programme and allow inspectors to examine its facilities. The Iranian government insists its uranium enrichment project is purely to provide electricity for the country. But members of the UN Security Council are not convinced, slapping more sanctions on the country in June. President Obama is widely expected to deliver a speech to the Assembly later in which he will leave the door open to talks with Iran.

This follows comments from both President Mahmoud Ahmadinejad and Ayatollah Rafsanjani that were interpreted as a signal the country was willing to enter into negotiations, as the effect of the new sanctions had been more swingeing than expected. However in an interview with the Associated Press news agency this week, the Iranian President appeared defiant. “If the (sanctions) were…effective, I should not be sitting here right now,” he said.

This week the UN has hosted a summit on whether the world was on track to meet the ambitious Millennium Development Goals to alleviate world poverty. President Obama delivered a speech which outlined what he described as a new approach to development issues, which would focus on entering into partnerships with struggling countries to ensure they weren’t reliant on handouts. “For too long, we’ve measured our efforts by the dollars we spent and the food and medicines that we delivered,” he said. “But aid alone is not development. Development is helping nations to actually develop, moving from poverty to prosperity.” Earlier, the Deputy Prime Minister Nick Clegg addressed the gathering of nearly 200 world leaders. He explained why developed countries needed to honour their financial promises to the world’s poorest, despite tighter budgets at home. “We have a job to explain to the people back home that this commitment is not only the right thing to do for all the moral reasons…but it’s also in our enlightened self-interest,” he explained – News.sky