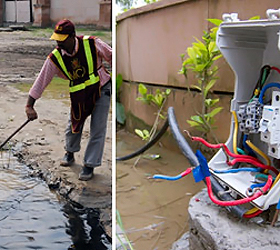 New pictures obtained by Sky News show the shoddy conditions inside the Commonwealth Games Village in Delhi. They reveal India’s ramshackle preparations to house 7,000 of the world’s top athletes just ten days before the Games begin. Sky’s Geraint Hughes, at the scene, said 40% of the 34 new tower blocks built for the stars “are still not ready or clean”. He said stray dogs have been living in the buildings, and the reek of human and animal sewage is apparent as soon as you enter the area. A team from The Times gained access to the athletes’ lodgings – an area said to be off limits to the media.

They said they were met with exposed electric wires and open manholes. “We discovered a complex that, barring a miracle, will not come close to the minimum standards expected of the shoddiest holiday resort by the time the first athletes are due to arrive,” said reporter Rhys Blakely. In the Indian government’s scramble to rescue the situation, he said there was evidence of child labour being used. Some of the children were as young as seven. The Indian Prime Minister is holding emergency talks in Delhi in an attempt to avoid an international boycott of the Games. Manmohan Singh intervened after the event was threatened with a mass exodus from countries worried about health and security issues.

The first members of England’s team, from men’s hockey and lawn bowls, will leave for India later as uncertainty over the future of the competition continues. So far Scotland, New Zealand and Canada have delayed their departures, and some nations may not take part at all after a ceiling collapsed in the weightlifting arena. It came a day after 27 people were injured when a footbridge at the Jawaharlal Nehru stadium – the centrepiece of the Games – collapsed. Sir Andrew Foster, chairman of Commonwealth Games England, says he is “very concerned” about standards in Delhi and still requires assurances from organisers over the athletes’ village and the games arenas. Deputy Prime Minister Nick Clegg has stepped into the debate, stating that “time is running short” for the Games.