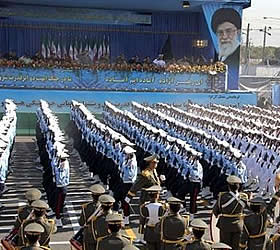 Iranian authorities say a bomb exploded at a military parade in the northwest and has killed at least 12 people, wounding 70 others.

Reports from Mahabad say most of the victims are women and children. The wives of two military officers are said to be among those killed.

The bomb went off at a military parade in the northwestern town Wednesday morning. Similar events are being held around the country as it marks the beginning of the Iran-Iraq war, 30 years ago.

No one immediately claimed responsibility for the blast. But provincial Governor Vahid Jalalzadeh blamed what he called “counter-revolutionary groups.” The phrase is often used to refer to Kurdish militants in the region.

Mahabad lies close to the borders of Turkey and Iraq and is home to many ethnic Kurds and minority Sunni Muslims. – voanews