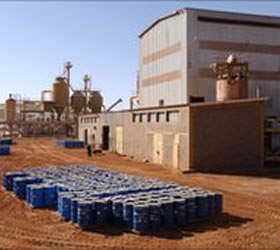 French intelligence agents are looking into a claim by al-Qaeda in the Islamic Maghreb to have kidnapped seven foreign workers at a uranium mine in Niger.

A statement purportedly by the militant group said it would issue demands to the French government “shortly” and warned it against “anything stupid”.

France has sent troops to hunt for the hostages, five of whom are French. The others are from Togo and Madagascar.

They were last seen heading towards Niger’s borders with Mali and Algeria.

Two of the French nationals were employees of the French nuclear energy firm, Areva, which operates the mine near Arlit. The other five hostages worked for a subsidiary of the French construction company, Vinci, which was a subcontractor there.
‘Blessed operation’.

In an audio statement broadcast by al-Jazeera on Tuesday, a spokesman for al-Qaeda’s North African offshoot said a group led by Sheikh Abou Zaid had managed to evade the tight security in place at Arlit and kidnapped “five French nuclear experts” early on Thursday.

“The men were able to attack the mine at Arlit, which is considered one the world’s most important sources of uranium that France has been stealing from for decades,” Salah Abou Mohammed said. “We claim responsibility for this blessed operation and tell the French government that the mujahideen will inform it with their legitimate demands at a later time.”

“We also warn them from doing anything stupid,” he added. The French Defence Council later met at the Elysee Palace to discuss the statement, which has not yet been authenticated.

Niger’s government said evidence suggested the kidnappers were affiliated to Abou Zaid, the leader of al-Qaeda in the Islamic Maghreb (AQIM) in northern Mali. On Monday, France said it had dispatched 80 military personnel to Niger’s capital, Niamey, to help search for the hostages. Long-range Breguet Atlantique aircraft and a Mirage jet, equipped with sophisticated monitoring equipment, were also sent.

The hostages and their captors were last seen heading towards Inabangaret, an important well and stopping point in north-western Niger. Al-Qaeda in the Islamic Maghreb (AQIM), an offshoot of the Islamist militant group, is active in the region and has kidnapped French and other European nationals in the past.

In July, the group announced that it had executed a 78-year-old retired French engineer it was holding hostage in Mali, after a raid by the French and Mauritanian armed forces failed to free him.

The following month, the Spanish government is believed to have paid millions of euros to free two of its nationals seized by AQIM in Mauritania. Niger is the world’s sixth biggest producer of uranium, and the radioactive heavy metal is its main export. Areva gets much of its uranium from the two mines it operates in the country, Arlit and Imouraren – BBC