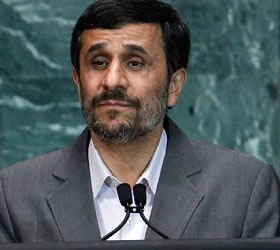 In a speech on the second day of a UN anti-poverty summit, the Iranian leader blamed capitalism and transnational corporations for “the suffering of countless women, men and children in so many countries.”

Ahmadinejad’s speech to the 192-member General Assembly never mentioned the Millennium Development Goals — the UN targets set by world leaders in 2000 to combat global poverty by 2015 — that are the focus of the three-day summit called by Secretary-General Ban Ki-moon to spur their implementation.

The UN chief has expressed satisfaction that the world is technically on track to cut extreme poverty by half, the No. 1 goal, though some critics say it’s mainly because of the tremendous improvements in China and India. Many recent reports show that the world’s poorest countries, especially in sub-Saharan Africa, have made little progress in eradicating poverty.

And in Africa, Asia and Latin America there also has been a lack of progress in meeting other key goals including reducing mother and child deaths, increasing the number of people with access to basic sanitation, and promoting women’s equality.

According to the UN, the proportion of people living on less than $1 a day in developing countries fell from 46 percent in 1990 to 27 percent in 2005 and should reach the target despite the recent economic crisis. “However, even if these positive trends continue, in 2015, roughly 920 million people would still be living under the international poverty line of $1.25 a day, as adjusted by the World Bank in 2008,” the UN said.

Ahmadinejad said world leaders, thinkers and global reformers should “spare no effort” to make practical plans for a new world order that would reform international economic and political institutions.

To spotlight the importance of this effort and the need for all countries to participate, Ahmadinejad proposed that the United Nations name the coming 10 years “the decade for the joint global governance.”

In his brief speech, intertwining philosophy and religion with the current state of the world, Ahmadinejad declared: “The undemocratic and unjust governance structures of the decision-making bodies in international economic and political fields are the reasons behind most of the plights today humanity is confronting.”

“It is my firm belief that in the new millennium, we need to revert to the divine mindset … based on the justice-seeking nature of mankind, and on the monotheistic world view…,” the Iranian leader said. “Now that the discriminatory order of capitalism and the hegemonic approaches are facing defeat and are getting close to their end, all-out participation in upholding justice and prosperous interrelations is essential.” While Ahmadinejad blamed the world’s problems on powerful capitalist nations, German Chancellor Angela Merkel laid much of the blame on developing nations.

“It is in their hands whether aid can be effective,” she said. “Therefore, support to good governance is as important as aid itself.” Merkel told the leaders that while the goals must be implemented rigorously, “unfortunately, today we have to admit that we will not achieve all the Millennium Development Goals by 2015.”

President Ellen Johnson Sirleaf of Liberia, one of the world’s poorest nations that has made progress because of the goals, said Africa “still has far to go” but if efforts are intensified “we will, ultimately, achieve them.”

“My message is this: As we renew our resolve in 2010, we must recognize the need for inclusive economic growth. We need rapid, stable, and sustained growth that creates jobs, especially for youth and in sectors that benefit the poor, and expands opportunities for women,” she said. In the first day of the meeting, French President Nicolas Sarkozy implored leaders not to return to their “old bad habits” of ignoring global poverty.

He was the first to accept the secretary-general’s challenge for nations to deliver more resources to combat global poverty, ignorance and misery. He pledged on Monday to boost France’s annual $10 billion contribution to the world’s poorest people by 20 percent over the next three years. He urged other leaders to join him. In his opening address Monday, Ban called for political leadership and more resources, saying the goals can be achieved. With world economies clawing back from the worst recession since World War II, the UN chief said: “We should not balance budgets on the backs of the poor.” “We must not draw back from official development assistance — a life-line of billions, for billions,” Ban said – Arabnews